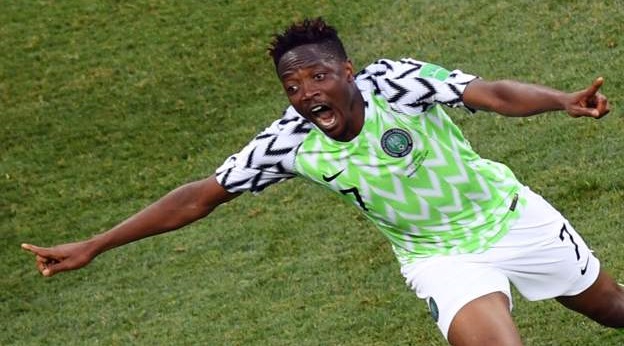 Two goals by Ahmed Musa ensured the Super Eagles of Nigeria grabbed all three points from their second group game of the 2018 FIFA World Cup against Iceland in Volgograd Arena, Russia on Friday.

After a first half without any shot on target for Nigeria, the Leicester City star put Nigeria ahead 3 minutes into the second half, and went on to double the lead on 75 minutes.

Musa, who netted twice against Argentina in the 2014 finals, has scored each of Nigeria’s last four World Cup goals, with today’s goals meaning he is the highest goalscorer at World Cup tournaments for the Super Eagles.

Iceland nearly pulled one back after the Video Assistant Referee (VAR) awarded them a penalty. Tyronne Ebuehi clearly committed a foul on Alfred Finnbogason. But the Europeans failed to convert the kick as Gylfi Sigurdsson fired it over the bar.

Nigeria held on to the lead to earn their first win of the competition.

The Eagles had a disappointing start to the tournament after they fell 2-0 to Croatia in their opening match last weekend.

Coach Gernot Rohr made some changes in the starting line up, introducing Leicester duo of Kelechi Iheanacho and Musa up front and placing captain John Mikel Obi deeper in the midfield and allowing Oghenekaro Etebo to play more forward.

The tactical approach may have paid off as his side have now boosted their chances of advancing from the acclaimed ‘group of death.’

With one point each for Iceland and Argentina, Nigeria, now on three points, sit comfortably on second spot in the Group D table behind six-pointers Croatia.

Nigeria will play against Argentina next Tuesday, as they continue in their quest to earn a spot in the round of 16 of the 2018 finals.