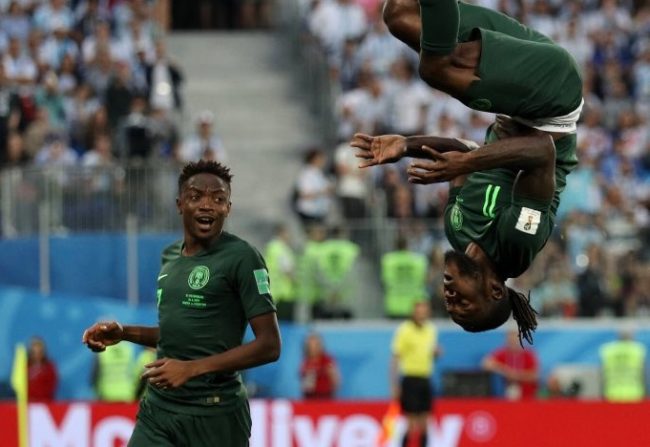 Super Eagles forward and Al-Nassr star, Ahmed Musa, has wished his compatriot, Victor Moses, well in his future endeavours after the latter announced his retirement from international football.

Moses made his decision known through a long statement on his Twitter handle on Wednesday, citing full focus on his club career and his young family.

Musa and Moses were Nigeria’s goalscorers at the recently-concluded FIFA World Cup in Russia. And Moses provided the assist that led to Musa’s first goal against Iceland.

“It was a pleasure to play alongside such a great player,” Musa tweeted after Moses announced the retirement.

“You have served your nation well and will always be remembered. Good luck in all you do🇳🇬🦅🙏@VictorMoses,” he wrote.

Moses represented England at the U-16, U-17, U-19 and U-21 levels before switching allegiance to Nigeria.

He won the 2013 Africa Cup of Nations title with Nigeria and also played at two World Cups.

He was capped 37 times by Nigeria and scored 12 goals.

It was a pleasure to play alongside such a great player. You have served your nation well and will always be remembered. Good luck in all you do🇳🇬🦅🙏@VictorMoses pic.twitter.com/b7gVutJf7T