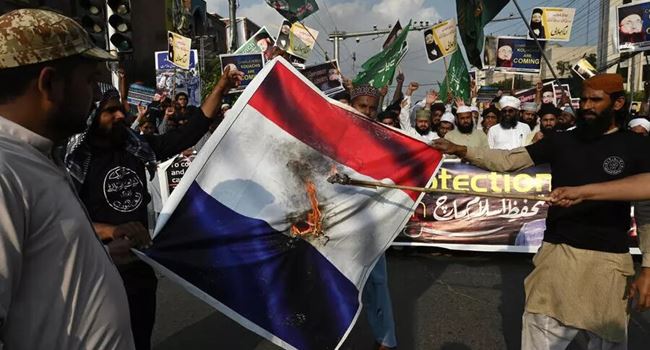 Tens of thousands of Muslims – from Pakistan to Bangladesh to the Palestinian territories – poured out of prayer services to join anti-France protests on Friday, as the French president’s promise to protect the right to caricature the Prophet Mohammad continues to roil the Islamic world.

An estimated 40,000 people in Bangladesh marched after Friday prayers in the capital Dhaka.

“We urge the government to convey our anger to France and boycott French products until France offers a public apology for what it has done to Muslims,” said Akramul Haque, a protester.

This came after the fatal stabbing attack recently recorded in the France city of Nice was condemned by world leaders who have all demanded that terrorists attacks must stop immediately.

One of the first to condemn it was Turkey, embroiled in a row with France over the publication of cartoons of the Prophet Mohammed that have triggered a wave of attacks against French people.

“We strongly condemn the attack committed today inside the Notre-Dame church in Nice,” a Turkish foreign ministry statement said.

US President, Donald Trump, expressed his sadness over the incident and equally condemned the attack, while UN chief Antonio Guterres, as well as European, Arab and Israeli leaders also expressed their displeasure at the slew of attacks targeted at French nationals.

Filmmaker cautions on implications of content consistently fed to viewers