Muslims are not useless, illiterates —Sultan 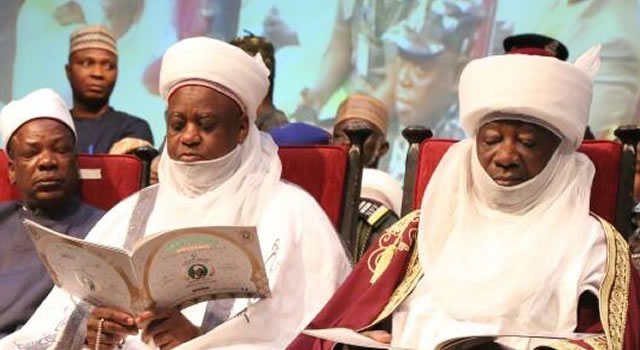 Sokoto Sultan, Alhaji Sa’ad Abubakar III, has debunked the perception by some people that Muslims, especially those of them from the northern part of Nigeria, are Illiterates and “useless”.

According to the Sultan, Muslims should not be seen as illiterates and useless just because some of them do not speak in English.

This was as the Sultan of Sokoto, also called on Nigerian politicians to channel billions of naira spent on political campaign to educate the populace.

He stated this when he spoke in Lagos on Monday at the centenary celebrations of Sheikh Adam Abdullah El-Ilory, at the University of Lagos.

“We cannot allow people to bring our heads down and say we (Muslims) are useless. We are highly educated. We need to take this challenge up and ask ourselves, ‘Why do people look at us Muslims as illiterates?’

“I don’t understand how someone who is very fluent in the Quran, who can recite it off-heart be called an illiterate because he doesn’t speak English. Islamic education is perpetually an entity of self -discipline, which involves physical and spiritual training of man.

“It is the balanced growth of man through training of intellect. The bulk of Islamic education is meant to facilitate the proper growth of the total personality of man. It is a way of life.

“When we are talking about Islamic education, don’t think we are being backward because it is the making of a total human being and when you become one, you would shun corruption and avoid illegal dealings,” he said.

He also advised that government should start a programmed where students will be taught in local languages.

He said, “We need to start teaching our students with local languages. When you travel to Japan or China their students are taught in local languages and we can all see what they have become today in area of development. Why don’t we look at the way of educating our children in local languages that we think they will easily understand? The end justified the means, the important thing is the result, how you achieve it doesn’t matter.

On politicians and funds spent on campaigns, he said, “I want to challenge our political that the billions they spend on political campaigns for offices should be channeled into education. When this heavy amount of money is channeled into educating millions of people and they have job to do, when it comes to election, you don’t need to reach out to them financially, they will voluntarily vote.”

President of the Senate, Bukola Saraki, who also spoke at the event, explained that education was the secret of most developed countries, adding that “We need to continue to strengthen our human resources. People always say that we have population as strength in this country, but we must ensure that they are well educated and empowered.”

I love being criticised –Babangida