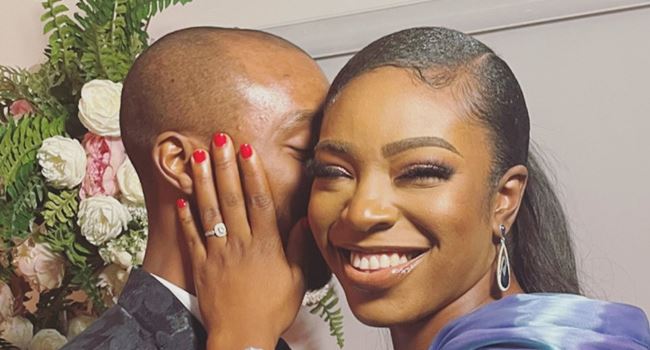 The son of Kaduna State Governor, Nasir El-Rufai, Bashir, has been taken through the grinder by Muslims for sharing loved-up photos of himself and his newly wedded wife on Twitter, calling the photos un-Muslim like and asked him to take them down.

Bashir who got married to Halima Nwakaego Kazaure only recently, had taken to his Twitter handle to post their photos at an event but the photographs angered a lot of commenters who considered such pictures inappropriate and not worthy of a true Muslim.

Some even said the photos are acts of blasphemy and that Bashir should be arrested and charged to a Sharia Court.

A very angry man who reacted to the photos, Mudassir Basir with the Twitter handle @Mudassirbasir, wondered why Bashir, a well-educated Muslim, should post such provocative picture for public consumption.

“Expecting to have religiously educated child from this kind of Muslim couples is the highest self-deception. However, that’s the kind of training he received at home, I have never seen his mum wearing a veil (hijab) even once. This is the result of not choosing your child a good mum.”

Another commenter, with the name @TheLazyCheff, said the photos constitutes blasphemy against the Holy Prophet Muhammad.

“Why you dey grab woman yansh? This is blasphemy against our holy prophet SAW,” he wrote.

Read more of the comments here:

SoltanBabayo (@soltan212): “Openly going against the directives of Allah and His rasul won’t augur well in what you guys intend to do soon. You need Allah’s blessings in your home more than public applause of your deviation. May Allah set right our affairs.”

AbuSiddiq Irani (@IraniSadiq): “Remember, even when there is a wrong somewhere, “To admonish your brother in private is to improve him, but to admonish him in public is to humiliate him.” What most of us do on Twitter in the name of correcting modesty, whatsoever, is rather Humiliating.”

Mr. AbdurRahman (@Abdul92598688): “It seems many people are not religious sensitive. They fail to understand that marriage is an act of Ibadat. And in Ibadat, you do things that are in accordance with the teachings of the Prophet. I’m actually cross seeing the pix!”

Jennifer Opara: (@OparaJennifer): “So these rich politicians know what they are doing. So El-Rufai son’s wife doesn’t cover her head in public, wahala for who no wan get sense.”

@Kaneem7: “@Rahma_sadau posted a picture, you were all shouting at her, but now no one is talking… Anyway happy married life.”

Muhd Kabir (@mkabirfulani333): Don’t compare @Rahma_sadau and @BashirElRufai because Rahama showed what isn’t in our adini and culture and still her dress shows more nude than this.”