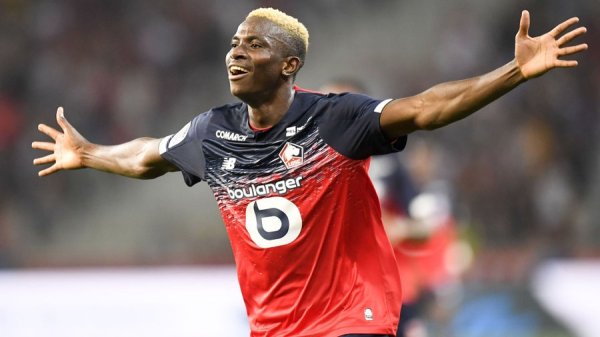 Super Eagles forward, Victor Osimhen has narrated his experience on the night he scored his first goal in the UEFA Champions League.

The 21-year-old, who joined French side Lille at the start of the season, played in the European clubs elite competition for the first time against Ajax on matchday one but bagged his first goal against Chelsea.

Osimhen said he could not sleep after scoring the goal in Lille’s 2-1 home loss to Chelsea last October.

Tammy Abraham had opened the scoring in the 22nd minute before Osimhen equalised on 33 minutes, but Brazilian winger Willian netted the winning goal for Chelsea 13 minutes from time.

Read Also: Osimhen will break many records in Europe and Nigeria — Ighalo

Despite the defeat, Osimhen said he was was elated having scored his maiden goal in the competition as he told Nigeria Info: “I didn’t sleep.”

“After the game, we had a free day the following day, so I couldn’t sleep.

“Whenever I go home whether we lose or win, I always go down on my knees to thank God. So I was thanking God when I got home, it is a memory that will linger forever and I called my friends and spoke with them until I slept off.

“Many of my friends are Chelsea fans, so they told me they don’t care if Chelsea win or not that I’m going to score my team’s only goal.”

Lille would later crash out of the competition at the group stage after finishing at the bottom of the group.

Osimhen has scored a total of 13 goals in Ligue 1 this season.