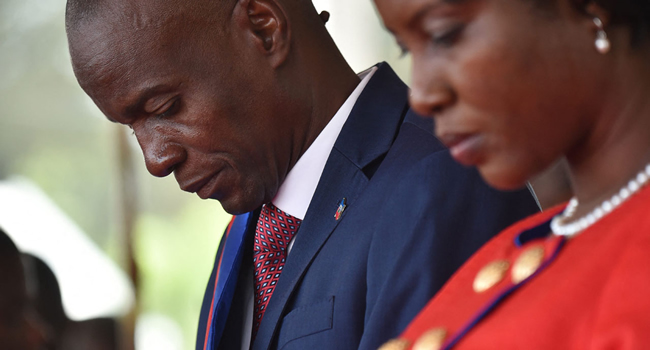 Widow of the assassinated President of Haiti, Jovenel Moïse, who was killed on July 7, has described the moment assassins “riddled” her husband with bullets after bursting into their home in the middle of the night.

Martine Moïse, who was injured in the attack, said the assassination happened so quickly, her husband was unable to “say a single word”.

Martine who was flown to Miami for treatment after the attack, posted a voice message to her Twitter page on Saturday, vowing to continue her husband’s work.

“In the blink of an eye, the mercenaries entered my house and riddled my husband with bullets,” Mrs Moïse said in the recording, describing the moment the attackers killed her husband.

“This act has no name because you have to be a limitless criminal to assassinate a president like Jovenel Moïse, without even giving him the chance to say a single word,” she continued.

She suggested her husband could have been targeted for political reasons, particularly, mentioning a referendum on changes to the constitution which could have given the president more power.

“I am crying, it is true, but we cannot let the country lose its way. We cannot let the blood of President Jovenel Moïse, my husband, our president whom we love so much and who loved us in return, flow in vain.”

Moïse who was 53 at the time he was killed, was president of the poorest nation in the Americas, since 2017, with his time in office marked with a rocky relationship with members of his parliament on the one hand, and the opposition on the other.

He faced a series of accusations of corruption and there were widespread demonstrations in the capital and other cities earlier this year.

Parliamentary elections should have been held in October 2019 but disputes have delayed them, meaning he had been ruling by decree. He had planned to hold a referendum on the proposed constitutional changes this September.

‘This is more magical than I ever imagined,’ Virgin Atlantic chief, Richard Branson shares space experience

Violence erupts in South Africa over imprisonment of ex-President Zuma