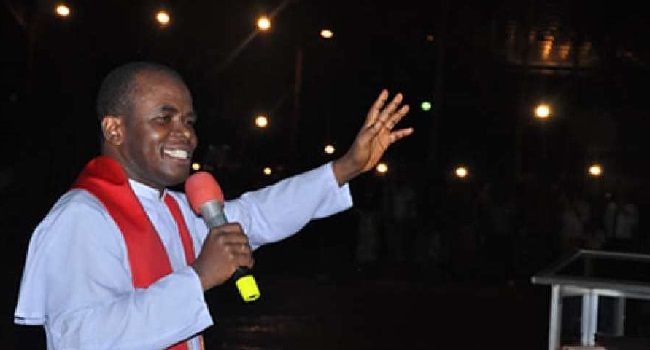 The church wing of the All Progressives Congress (APC) led by Rev. Father Ejike Mbaka is the most popular church in Nigeria today.

It is one church where prophesies happen few days after they are released.

I am sure the other GOs: Adeboye, Oyedepo, TB Joshua and other “annointed men of God” must be envious of Mbaka.

Imagine a prophesy that swept the country by storm. And everybody is talking about it.

The spiritual director of the APC, Rev. Father Ejike Camillus Mbaka says he has 39 more prophesies.

Please let’s ask him to release them.

And I tell you, many more politicians whose cases are yet to be decided will take him seriously. They are already fidgeting.

Emeka Ihedioha did, hoped it would be a fluke, but it wasn’t.

But as a Catholic and a Knight of the Catholic Church – the mother church, I’m not excited about this Mbaka person. I’m rather worried.

Read also: Vision 2023 : Dear President, before you stand down

He is sowing hatred. He is not seeing or hearing from God. Quote me. Like all other GOs, he is a conman. This latest adventure will fetch him more money, more followers and many more enemies, too.

I have no biases in the Imo State issue. I am not a lawyer. I am not informed as far as the case is concerned. The law is an ass.

Since Ikedi Ohakim days, even with Evan(s) Enwerem (mature) the State has been ruled by men whose character you cannot honestly vouch for.

I may be wrong, but from what I hear from Imolites, these men have some baggage.

The Ihedioha camp will be enraged. The Uzodinma camp is excited. Mbaka, to them is “a real man of God”. But let them not forget what he said and “re-said” about both Jonathan and Buhari. He is a guy man o!

Do not say I didn’t warn you. Chimaroke Nnamani, former governor of Enugu State is still alive o. After they had a running battle and Nnamani shut down his GTC Adoration Ground, he prophesied his death. The guy is still alive and kicking. Mbaka is still using his belzzebub powers.

The Catholic Church does not encourage these voodoo prophesies. The Holy Fathers have never given any. By the way, why is it only in third world countries that these prophesies are rampant?

People use their contacts in government, study events, dream dreams and release them as prophesies. And we believe them.

Pray, when will they prophesy that things will get better for us? Is it always doom? Yes, it is doom for Ihedioha, even though it is boom for Uzodinma.

Anyway, a very dear friend of mine is going to get a juicy appointment in the new administration of Hope. So, let me not become his enemy. Politicians are not enemies. Let me not make myself one.

Let’s Hope that the new Uzodinma.

As for Ejike Mbaka, I’m worried at the direction he is taking the Catholic Church.