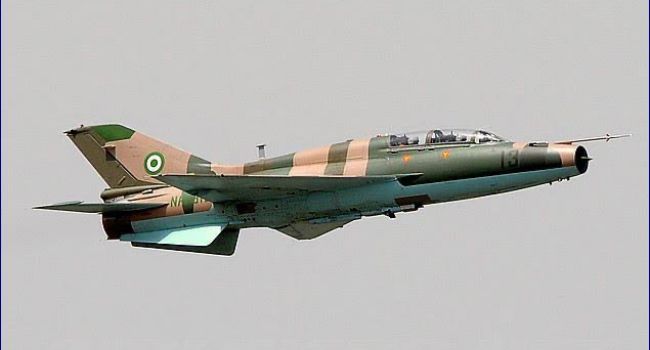 The Nigerian Air Force (NAF) has confirmed the elimination of a notorious killer bandit kingpin identified as Alhaji Shanono who was killed alongside 18 other terrorists during air bombardments of their hideouts in Kaduna State.

The NAF’s Director of Public Relations and Information, Air Commodore Edward Gabkwe, in a statement on Thursday, said the terror kingpin was killed during the bombardments which took place between Tuesday night and Wednesday morning.

The Force spokesman said the Chief of Air Staff (CAS), Air Marshal Oladayo Amao, is currently reviewing the ongoing air operations in Kaduna and other states being disturbed by the bandits and terrorists.

The statement seen by Ripples Nigeria reads in part:

“In the Northwest specifically, the effect of strikes undertaken by NAF aircraft have revealed that several terrorists’ have been eliminated and their enclaves destroyed.

“One of such strikes which occurred on 9/10 August, 2022, resulted in the elimination of a well known terrorist leader operating in Kaduna State.

“Indeed, following receipt of intelligence on 9 August 2022 that a well known terrorists’ kingpin, Alhaji Shanono, had scheduled a meeting with his foot soldiers at Ukambo, a village about 131 km from Kaduna, the Air Component of Operation Whirl Punch dispatched aircraft for interdiction mission at the location.

“Overhead the location, terrorists were sighted under clusters of trees at the foot of Ukambo high ground and after ensuring the absence of civilian settlements within the location, the crew received the authorization to strike.

“Feedback from local sources disclosed that over 30 rifles and 20 motorbikes were destroyed while about 18 terrorists, including Alhaji Shanono, were neutralized while others sustained various degree of injuries.

“Sources also revealed that not less than 26 kidnapped victims earlier held by the terrorists were released as a result of the airstrike.

“This is even as intensive air operations endured in the entire military theatres of operation as NAF aircraft continue to seek and decimate enemies of the state in their attempts to make life unbearable for innocent Nigerians.”