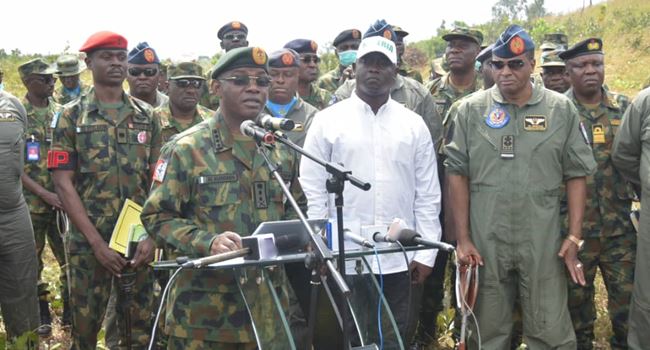 Launching the operation at Kamuku forest, the Chief of Defence Staff, General Gabriel Olonisakin, said the operation was to ensue that bandit operations were brought to an end in the state.

He also said NAZO was in line with the vision for the armed forces, which was to ensure a well-motivated, trained and equipped armed forces that would be responsive to national security commitments.

He added that the Defence Headquarters had facilitated conditions necessary for the services to operate, which has helped in services’ effectiveness towards curtailing the myriad of security challenges bedevilling the country.

The Chief of Air Staff (CAS), Air Marshal Siddique Abubakar, described the training and exercise as a child of necessity birthed to protect national assets such as aircraft in the defence of national territorial integrity against internal or external saboteurs.

The development followed the displacement of over 1,000 villagers from 18 villages bordering Birnin Gwari by armed bandits.

The displaced people were reportedly given relief materials by the National Commission for Refugees and Internally Displaced Persons.

It was also gathered that about 1,200 displaced villagers had also taken refuge at LEA Primary School, Birnin Yero along Kaduna-Zaria Highway in Igabi Local Government due to the bandit activities that sacked their community.