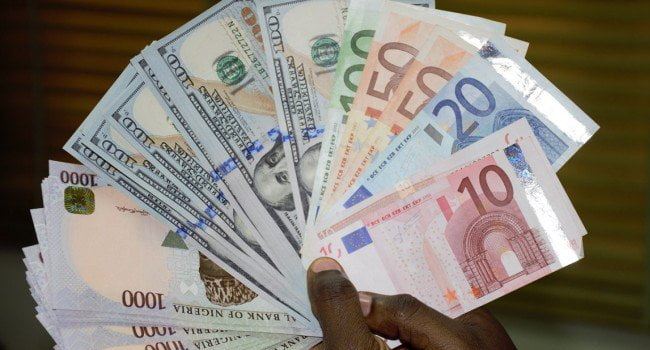 Naira increased slightly in value against the U.S. dollar at the official market in the midweek session after two straight trading days of losses.

Ripples Nigeria gathered that Nigeria’s naira closed at N416.50 per $1 at the close of business on Wednesday.

This is the lowest official rate the naira has traded at the over-the-counter market this week.

Naira’s increase in value is on the back of improved FX supply to the market window, which enabled end-users to have their requests met by the dealers, which were mostly financial institutions.

FMDQ data showed a total of $155.16 million was recorded as forex turnover at the close of the day’s business.

Against the British Pounds and Euro, the exchange rates remained unchanged.

It was the same story for black-market currency traders as they retained the Naira exchange rate to the dollar at N585.

Meanwhile, a former President of the Association of National Accountants of Nigeria (ANAN), Dr Samuel Nzekwe has called on Nigerians to show respect to the Naira.

According to him, people need to protect and respect the nation’s currency by handling it with care.

Nzekwe who is reacting to the penalty CBN placed on banks for depositing mutilated Naira notes said most of the problem comes from Nigerians.

He also suggested that stiffer penalties be put in place for anyone caught abusing the nation’s currency to serve as a deterrent to others.