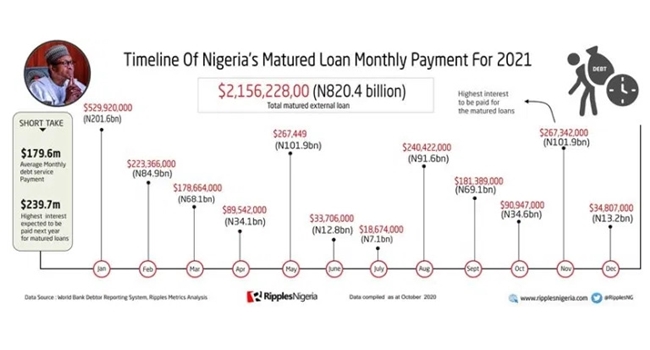 The depreciation of Nigeria’s Naira has increased the nation’s external debt service in January by about N34.3 billion.

According to the monthly economic report for January released by the CBN on Friday, Nigeria paid $620 million for external debt service in January.

However, in November Last year, Ripples Nigeria revealed that Nigeria was actually expected to pay $529,920,000 for January matured loan.

Using figures published in August by the World Bank Debtor Reporting System, Ripples metrics revealed that a total of $2.15 billion of matured loan is expected to be paid in 2021 to 10 levels of creditors’ type classified under multilateral, bilateral and bonds agreements.

CBN in its economic report noted clearly that depreciation of naira to the dollar contributed to the rising debt service payments.

Statistics from CBN showed, that as at the time Ripples Nigeria obtained Nigeria’s debt obligation for 2021 from World Bank reporting system, Nigeria’s Naira at Inter-bank Foreign Exchange Market (IFEM), exchanged at a monthly average of N316 to a dollar.

The exchange rate however increased to 381 in August the same rate quoted by CBN in its January 2021 economic report.

In his words, “devaluation of Nigeria currency happened last year from ₦306 official figure to ₦379, now, when you study debt management publication carefully, you will see that because of devaluation, Nigeria has added ₦1 trillion to debt for borrowing nothing “

“Looking at the foreign component of Nigeria’s debt and the conversion to Naira, Nigeria devalued and borrowed in dollars that its self will make our debt profile to increase,” he said.

He added that Nigeria will still service this debt at the same dollar rate it borrowed the money because the rate of servicing has not reduced.

Similarly, a recent Bloomberg report revealed that banks are projecting a boost in profits due to a weaker naira in 2021.

According to the report, FCMB Group Plc foreign currency earnings rose more than two-fold to N10 billion ($24.5 million) from N3.5 billion and expect to grow further in 2021 as Investors expect the naira to trade at 425.69 naira per dollar in three months and 440.50 naira per dollar in six months.

While this looks unlikely, the pressure from IMF and World Bank might see the projected exchange rate take effect.

A Goldman Sachs reports that CBN might consider devaluing the currency again in the short term to meet the conditions for international financing.

However, Nigeria government has continued to defend that the country’s debt level is sustainable and will continue to look into debt market this year.

According to RipplesMetrics report the payment represented a 329.5 percent rise compared to $1.34 billion cumulative total debt service payment recorded in 2019.

This showed as at December 2020, debt servicing by CBN has increased by 1422.2 percent in the last five years.

Related Topics:EmefielenairaNigeria’s debts
Up Next