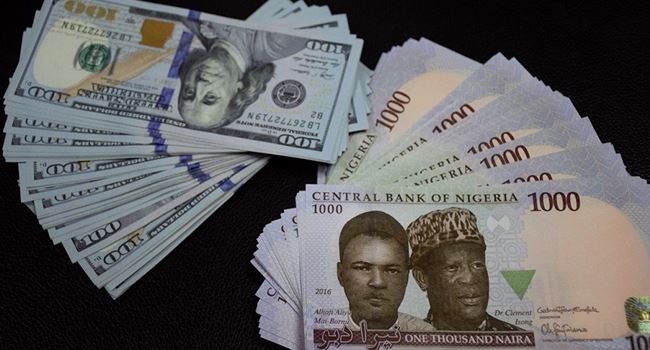 The Nigerian currency continues its free fall against the US dollar on the black market, as it exchanged at N562 per $1 on Wednesday.

Wednesday rate indicates Naira dropped N5 at the black market when compared to the N557/$1 it traded on Tuesday.

At the same market, the Nigerian currency depreciated against the Euro by N3 to close at N648/€1 in contrast to N645/€1 on Tuesday but was steady against the British pounds at N760/£1 same rate on Tuesday.

At the unofficial market, Data recorded on the FMDQ securities exchange window where forex is officially traded, showed that the naira closed at N412.06 per $1 the same rate it exchanged on Tuesday.

Forex liquidity at the market also was unchanged from Tuesday with $175.10 million recorded.

At the end of trade on Wednesday the difference between the official and unofficial market rates was pegged at N149.94.

Meanwhile, the Central Bank is expected to announce measures to stem the decline of the naira at the black market.

You may recall that the Central Bank issued a strong warning to deposit money banks, threatening to revoke their forex operating licenses for a year if they were found to be lacking in foreign exchange operations.

The CBN stated in the letter that the directive was necessary due to recent occurrences in the FX market, while also urging banks to always exercise due diligence when carrying out FX transactions.

UPDC among top gainers as market cap rises by 0.12%