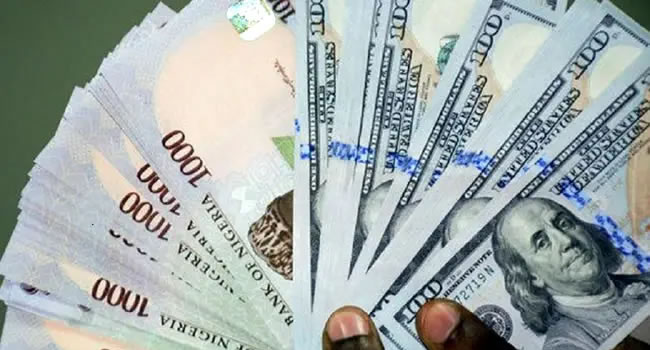 The Naira began the week at N545 per dollar at the black market, a 3.1 percent depreciation from last Monday’s opening rate.

The naira had opened last week at N528 but by the end of the week was trading at N545 per dollar.

According to data obtained from Abokifx, the Naira closing rate on Friday last week was a N5.00 or 0.93 percent lower than N540/$ it had closed on Thursday.

Similar to dollars, Naira will also have to put a strong fight against British Pound Sterling and Euro this week as it weakened by the end of Friday’s trading at the parallel market.

This means Naira will be opening the week against pounds sterling at N743/£1. This is N3 loss when compared to the rate of N740/£1 it closed on Thursday.

Also, the local currency against Euro will open the new trading week at N636/€1 and this represents a N4 devaluation from Thursday rate of N632/€1.

At the official Nafex window data from FMDQ securities shows on Friday, Naira lost further to the U.S dollars.

This occurred as foreign exchange supply sharply decreased during trading.

According to FMDQ data where forex is officially traded, Naira closed at N412.00 per $1.

This translates to a N0.33 or 0.08 percent devaluation from the N411.67 it exchanged in the previous session on Thursday.

While the foreign exchange turnover decreased by 22.92 per cent with $88.39 million recorded at the market session against the $114.68 million posted in the previous session on Thursday.