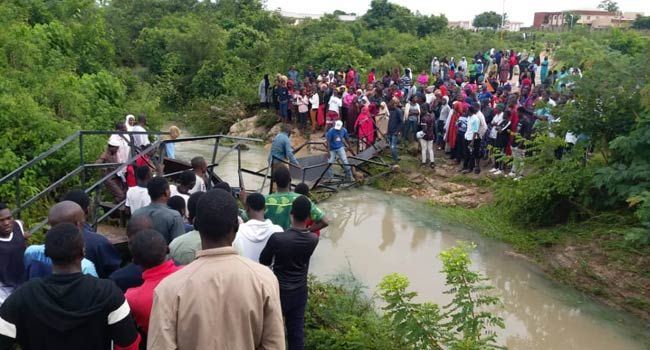 The National Association of Nigerian Students (NANS) has heaped the blame of the tragic bridge collapse which occurred at the Abubakar Tafawa Balewa University (ATBU), Bauchi on the door steps of the school.

NANS while indicting the school management of the ivory tower over the tragic collapse of the bridge which led to the death of three students and injured others, said the incident was due to negligence of those concerned.

The apex student union body in a statement made available to newsmen in Abuja on Tuesday, by its National President, Mr. Danielson Akpan, demanded compensation for the families of the students that lost their lives to the tragic incidence on Aug. 3 and award of admissions and scholarships to qualified members of their families.

“The Students Union Government was able to prove, beyond reasonable doubt, that they drew the attention of the management to the state of the bridge and the need to address it immediately.

“This was ignored by the management and the result was the death of students on Aug. 3.

“Secondly, we also discovered a serious disconnect and communication gap between the management of ATBU and the Students Union Government (SUG) as a major reason for inaction on the part of management,’’ he said.

Akpan also called on the management of ATBU to tender unreserved written apology to the families of the victims of the bridge collapse.

He said NANS had resolved that the management of the school must pay compensations to the families of the victims that lost their lives during the bridge collapse.

“The management of ATBU must take the full cost of medical bills of those injured during the bridge collapse.

“The school management must also reschedule examination and tests at convenient time after full recovery for those affected, who missed any exams or test as a result of injuries sustained.

“A suitable and standard bridge must be constructed to replace the collapsed bridge at the earliest possible time to ease movement of students from hostel to lecture halls,’’ he said.

The demand by NANS comes days after Vice Chancellor of ATBU alleged that the bridge collapse was caused by 30 students who were taking selfies when the incident happened.

The VC of the ATBU, made the claim when he received the state’s Governor Bala Mohammed who paid him a condolence visit.

The VC who said the metal bridge could only carry 10-15 people at a time noted that the number of students on the bridge caused it to collapse.

He also denied claims that seven students lost their lives during the incident stating that only three students died and no one was missing after the incident.

Related Topics:ATBUNANSNANS indicts ATBU
Up Next

S’South group urges Tunde Bakare, others to apologize to Jonathan