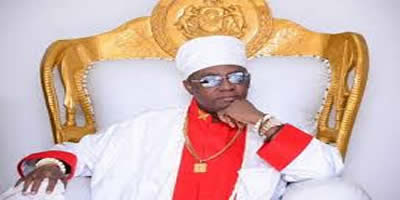 The National Agency for the Prohibition of Trafficking in Persons (NAPTIP) has dragged native doctors; ordinarily called juju priests to the Oba of Benin.

Director-General of NAPTIP, Julie Okah-Donli made the petition during an advocacy visit to the Benin traditional institution where she appealed to the monarch to prevail on the native doctors to desist from further administering oaths to victims of human trafficking brought to them by criminal elements.

Dissuading their role in trafficking, Okah-Donli explained, will stem the tide of trafficking in Edo State and the country as a whole.

She said, “We are doing our best in sensitising the juju priests against the practice and many have assured us that they will no longer administer oaths on the victims, but as a respected Royal Father in this land whose words are respected, I respectfully implore Your Majesty to use your good offices to talk to these juju priests and the chiefs involved. You may wish to summon all of them and talk to them, and we are ready to join Your Majesty to sensitise them on the effects of their actions on the helpless young people.

“Many of the young people that have left may never come back as they are dead and their parents are still hoping that they will come back some day with loads of money, while many have lost their minds as a result of the exploitation they have gone through.”

She also enjoined the monarch to bring the issue of human trafficking to the front burner within the fold of the traditional institutions across the country.

“Every victim of human trafficking has come from a community before being a Nigerian and one of the responsibilities of the traditional institution apart from upholding the culture and tradition of the land is to protect and defend the people that they lead,” she further added.

Responding, the Oba of Benin commended NAPTIP on its activities over the years and declared his commitment to the fight against the inhuman act, adding that he had done it in the past when he was Nigerian Ambassador to Italy.

The monarch said it was for that reason that he established the Oba of Benin Foundation with Miss Ifueko Aideyan as the Face of the Foundation.

“NAPTIP has been doing a very wonderful work in fighting human trafficking and everyone sees it. I know it is a difficult and challenging work but we are behind you’’, he said.

He directed officials of the Foundation and members of his cabinet to work with NAPTIP as partners to fight the scourge in Benin. He also warned perpetrators of the heinous act to stay away from Benin as the trade has brought more sorrow than joy to the people.

While condemning the enslavement of Nigerians in Libya, he disclosed his surprise when he heard that many of the victims were able bodied men and women who packed up their businesses, sold all they had to embark on the journey and later became slaves.

His advice: “If anyone wants to travel, he should travel legally.”

He also frowned at the activities of the native doctors and the juju priests in the trafficking chain but assured that the palace will call them to order.

“We have noted the activities of the native doctors or the juju priests as you call them. We will do our best to discourage them from getting involved in this crime. We will appeal to them. We will talk directly to them to stop what they are doing. We will call them to order and I believe they will listen to us,” he enthused.

Aside calling for a tripartite arrangement amongst the Federal, States and traditional institutions in the fight against trafficking, the Oba also blamed the leadership of churches, some of whom encouraged human trafficking through their activities.