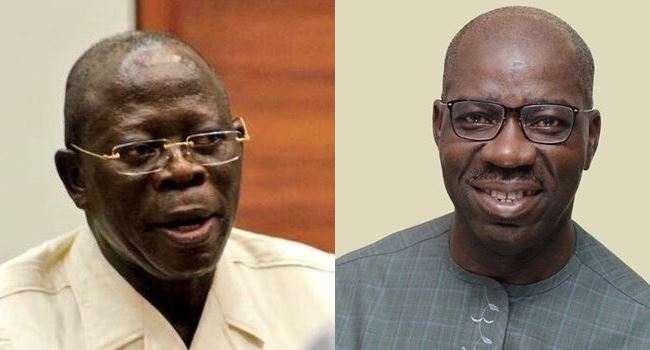 The Edo State Chairman of the All Progressives Congress, APC, Anselm Ojezua, has blamed the National Assembly for the festering nature of the crisis rocking the state House of Assembly.

According to him, the National Assembly does not have any reason to intervene in the crisis, adding that their intervention impeded the peaceful resolution of the crisis.

Ojezua stated this in a statement on Thursday house in Benin City, adding that since the matter had been taken to the court, the National Assembly ought to have waited for it to be determined there.

Ojezua however insisted that the people of the state would protect their independence if there was the need to do so, adding that the state was a federating unit of the country and should not be treated as a colony of the Federal Government.

“There is a prospect that the number will increase. I think what has actually been an impediment to a peaceful political resolution is the intervention of the National Assembly. If their intention is to come and help us in Edo, I think they have somewhat compounded our problem.”

The state APC chairman further argued that since 9 members formed a quorum, the assembly had been duly inaugurated.

“They have come and they have all the facts. What are the facts? That the seventh House of Assembly was inaugurated, that a leadership is in place and that they are actually functioning and that the matter is in court. With all that knowledge, what we expect them to report and to recommend is that in the light of all these facts there should be political solutions and also watch the judicial pronouncement.

“They didn’t do that rather they could not even wait for the National Assembly process to be completed before they went to town and therefore they may have justified speculations in town arising from an audio where one of the members-elect was boasting that the matter has been resolved and that the Senate President and Speaker of the House have been told what to do. And three days after, they did which the boy said.