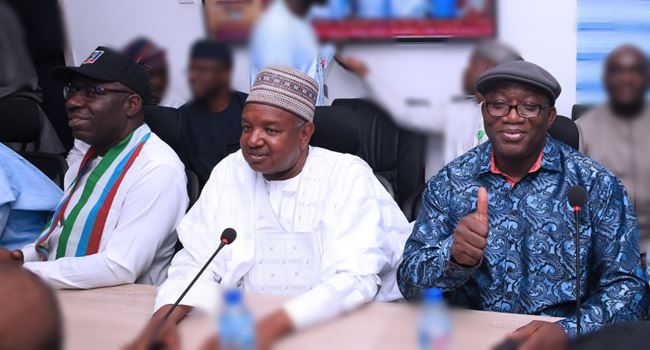 Ahead of the much anticipated inauguration of the ninth National Assembly on Wednesday, the governors in All Progressive Congress (APC) and the party’s National Working Committee (NWC) on Monday met in Abuja to perfect their plans to ensure that victory is certain as expected.

A source said, “the meeting was called to ensure that no one will derail from the laid down arrangement of the party, especially regarding the zoning of principal offices in the national assembly and ensure that lawmakers are elected on the party’s platform as directed”.

Read also: KOGI GOVERNORSHIP: Melaye is the least of my worries – Bello

Recall that things turn the other way for the party at the inauguration of the 8th NASS when former Senate President Bukola Saraki and Rt Hon. Yakubu Dogara emerged the leader of both Senate and House of Representatives against the wish of the party.

Meanwhile, in the much anticipated inauguration tomorrow, Senator Ahmed Lawan and Hon Femi Gbajabiamila have been endorsed as their party’s choice against the opposition, if any.