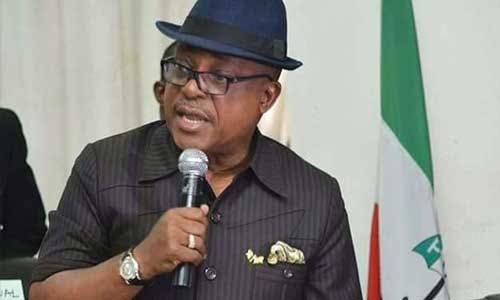 The stage is now set for a titanic battle between Senator Ahmed Lawan, the official candidate of the ruling All Progressives Congress, APC, for the office of Senate President, and Senator Ali Ndume, as the opposition Peoples Democratic Party (PDP), has thrown its weight behind him.

The decision to back Ndume was taken by the opposition party at a meeting on Monday night in Abuja between the National Working Committee (NWC) of the party and lawmakers-elect from the party.

Also endorsed by the party is Honourable Umar Bago for the position of Speaker of the House of Representatives, as against the choice of Femi Gbajabiamila, who is the preferred choice of the APC.

According to a source at the meeting that was presided over by the National Chairman of the PDP, Prince Uche Secondus, attendees engaged in serious permutations on whether their preferred candidates could defeat those lined up for the job by the ruling APC.

However, the national leadership of the PDP was said to have told the lawmakers-elect that the party must play the role of opposition in both chambers.

A source noted that there were signs that some members of the ruling party in both houses would also work against the party’s candidates, adding that the APC lawmakers were merely carrying on and appearing as if they were in tandem with the dictates of the national leadership of their party.

He said: “We have done our calculations very well. We have also spoken with a lot of lawmakers and we have come to the conclusion that we should not just be part of the crowd that the APC is forcing on Nigerians.

“We have spoken with our lawmakers-elect and even some members from the APC in both the Senate and the House of Representatives. We have interacted with the candidates running for different positions in both chambers.

“We know that the legislature must be independent and also be free to elect their leaders. We must not be seen to be controlling this special arm of government from outside. The legislature remains the beacon of Nigeria’s democracy.”

He said: “As the opposition political party, we must be seen to play responsible opposition role. Yes, none of the two presiding officers we are rooting for belong to the PDP, but we know that as a critical member of the National Assembly, we must have a say in the election of its leaders. This is the reason why we are backing both Ndume and Bago.”