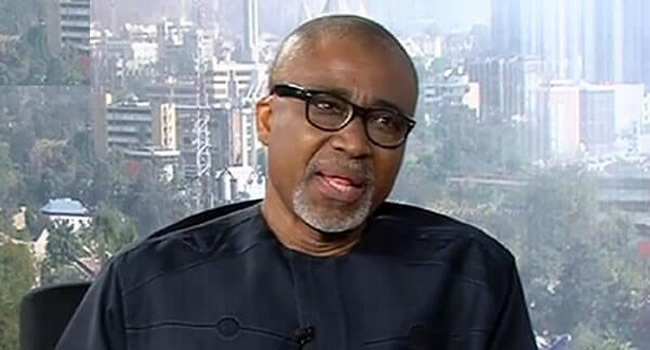 On June 18, Senator Abaribe said that Nigeria needed to break the political hegemony of the APC, and PDP in order to make the country work.

The outspoken Senator said this while featuring in an interview on Arise TV.

“I am disappointed that our politics here is riddled with a lot of errors. The country has been able to nurture hegemonic cliques inhabited by the two dominant parties in the country. We have to break the chain of hegemony in order to make Nigeria work. The country lags behind due to the politics of godfatherism,” he said.

Abaribe sounds like one who just woke up from a deep sleep. Whereas many would welcome his confessions as one typical of politicians, and their ever-changing perceptions, one sure thing, however, is that the scales may have fallen off the Senator’s eyes.

Bearing in mind that he has been a a long-standing member of one of the country’s leading political parties, PDP, his Damascus experience may not be totally divorced from the fact that he lost out in the party primaries, which saw him switching over to the All Progressives Grand Alliance (APGA) in pursuit of his political aspirations.

Abaribe may pontificate over hegemonic tendencies, but he would most likely be standing alone if he thinks a motley crowd would queue behind him in an effort to convince anyone that he would have dumped PDP if he had won the primaries.

“Unfortunately, as a result of the inability of the government to provide quality education in its public educational institutions, Nigerians have resorted to private schools and foreign schools for their education…The trouble with this is that most of those who patronise private-owned educational institutions or those who travel abroad to study are children and wards of Nigerian public officers.”

2. Nothing wrong with Muslim-Muslim ticket?

The Chief Whip of the Senate, Senator Orji Uzor Kalu, on June 15, declared that he saw nothing wrong with the APC fielding a Muslim-Muslim ticket for the 2023 presidential election.

Read also:NASS REPUBLIC: Doguwa on Osinbajo’s political goals. Two other stories, and a quote to remember

“Do you want me to speak the truth? If I am Ahmed Bola Tinubu, whose wife is a Senior Pastor at a Pentecostal Church, I will go for a Muslim-Muslim ticket. The most important thing is for the party to win. We should stop the issue of whether you put a Christian there or not,” he said while addressing journalists at the National Assembly.

Kalu, no doubt, is strategic in his considerations which are driven essentially by the widely-held belief that political parties exist to win elections and form governments.

While his position fits perfectly into the Machiavellian concept of the end justifies the means, Kalu would be playing the ostrich to assume that the religious sentiments can easily be waved away.

As many have argued, the 1993 scenario that saw the late Chief MKO Abiola and Babagana Kingibe winning the presidential election on the wings of a Muslim-Muslim ticket might just be too dangerous to attempt at a time the country has become too polarized along ethnic and religious lines.

All said, it would be interesting to see how Tinubu fares.

3. Flushing out criminals in Owo/Ose

Following the massacre of worshippers at St.Francis Catholic Church in Owo community of Ondo State, the House of Representatives, on June 16, at plenary, urged the Federal Government to flush out the criminal elements in the various forest reserves in Owo/Ose Federal Constituency, of the State.

“The House is certain that unless drastic security measures are put in place, similar attacks will continue to be carried out by the perpetrators until many communities are completely wiped out in the Local Government Area and other parts of my constituency,” Hon. Adelegbe Oluwatimehin said, among others, in his lead debate.

It is known fact that the efforts of the security agencies have not been enough in dealing with the rising security issues across the country. What worries many is the inability of the Federal lawmakers to mount adequate pressure on the Federal Government to ensure the security agencies perform the duty that has been assigned to them. The earlier lawmakers rise above the realm of rhetoric, the better for all Nigerians.

Ogun made the statement, on March 3, 2022, while leading the debate for a private member bill for an Act to regulate international studies for children and wards of Nigerian Public Officers. He represents Esan North East/Esan South East Federal Constituency of Edo State.

NASS REPUBLIC: Concerns over assault on traditional rulers. Two other stories, and a quote to remember

NASS REPUBLIC: Doguwa on Osinbajo’s political goals. Two other stories, and a quote to remember