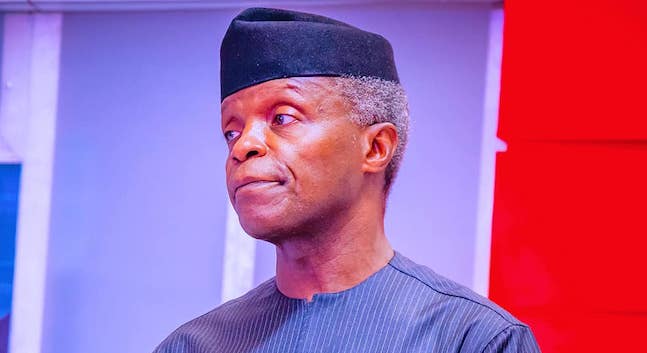 The majority leader of the House of Representatives, Hon. Alhassan Ado Doguwa, last week, disclosed that he was surprised that the Vice President, Prof. Yemi Osinbajo, did not step down for the eventual winner of the All Progressives Congress (APC), presidential primary, Asiwaju Bola Ahmed Tinubu.

On June 8, Hon. Doguwa argued that Osinbajo should have stepped down for Tinubu in the presidential race on grounds of him being a kinsman to the latter.

The House majority leader said this when he featured on Channels Television programme, Politics Today.

“Governors of Northern Nigeria did not only agree to concede power to the South. They galvanised their support and solidarity behind Bola Ahmed Tinubu. It was not a secret. So, I thought Vice President Yemi Osinbajo would have played ball being his kinsman,” he argued.

Doguwa’s disposition, though a post-mortem, barely scratches at what transpired in the period leading up to the APC primaries. Needless to say that it awakens the insinuation that the Vice President betrayed his former boss, Tinubu, by contesting the election against him.

However, as has been argued in different quarters, Doguwa’s shared sentiments fall flat in the face of the fact that Osinbajo did not breach any known constitutional or electoral law, and was more than qualified to run for any elective post or canvass the emergence of a political group.

If anything, Doguwa needs to be reminded that politics is an interest-driven game, and that he had just displayed that trait by wishing that the constitution of the country be ignored on grounds of basic sentiments.

“There is no use pretending or shying away from the fact that Nigerians are no longer safe in their homes, work places, schools, worship centres, roads and everywhere. We must therefore take the necessary steps to declare emergency on the security situation. All hands must be on deck to tackle the situation headlong but government must lead the way.”

A former leader of the Senate and Director-General of Rotimi Amaechi Campaign Organisation, Senator Mohammed Ali Ndume, on June 9, vowed to work assiduously to ensure that the APC wins all elections in 2023.

Read also:NASS REPUBLIC: On Salem’s one-man protest. Two other stories, and a quote to remember

Ndume, who made this known in a statement where he also congratulated Tinubu for winning the party’s presidential election noted that “As a faithful party man, I’ll work assiduously to ensure that the APC wins in all elections next year. There is a lot of work to be done and we need to start doing that right now.”

Ndume’s vow shows that he is ‘party man’, committed to the long term interests of the APC. As one who supported, and campaigned for Rotimi Amaechi at the party’s presidential primary, and saw him lose to Tinubu, his switch to party loyalty is recommended to politicians who are driven by short term goals and hardly motivated by the higher ideal to build enduring political platforms.

Ndume’s exemplary move is definitely good for the growth of the country’s democracy.

The Senate Chief Whip, Senator Orji Uzor Kalu, on June 5, called on the security agencies to expose and bring to book the killers of worshippers at St. Francis Catholic Church Owo, in Ondo State.

“The perpetrators must be exposed and brought to book. I urge security agencies to commence full scale investigations in a bid to arrest the perpetrators of the ugly act and avoid recurrence,” he stated on his verified Facebook page.

Kalu, like many of his ilk, has seized the moment to empathize with the people and government of Ondo State. Though this is welcome, it is doubtful if the outward displays of emotion would cause a fundamental paradigm shift in the way the Nigerian state has responded to rising insecurity in the country.

Beyond Kalu’s statement, therefore, is the huge moral question of the crocodile tears being shed when the Federal Government has shown little political will to deal with the challenge.

It behoves the government and the security agencies to work better in uncovering the attackers, and prosecuting them. This would help restore people’s confidence in the Buhari administration.

Nnamani made the statement, on April 16, 2022, while giving his goodwill message to Nigerians on the occasion of Easter celebrations. He is the Chairman, Senate Committee on Cooperation and Integration in Africa/NEPAD.

NASS REPUBLIC: On Salem’s one-man protest. Two other stories, and a quote to remember