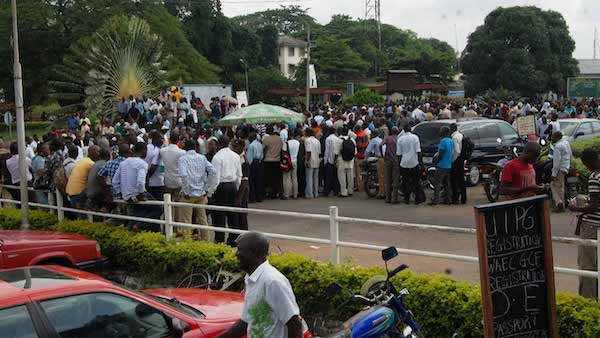 The Non-Academic Staff Unions in universities, under the aegis of the Joint Action Committee, has directed all its branches to resume nationwide protest in all the universities with effect from Tuesday, August 6, 2019.

It also gave the Federal Government a 14-day ultimatum within which it should accede to their demands or face an indefinite strike.

Joint Action Committee, which comprises the Non-Academic Staff Union of Universities and Educational Institutions (NASU) and the Senior Staff Association of Nigerian Universities (SSANU), are protesting over the non-payment of their earned allowances and the issue of sacked workers of university staff schools.

According to a circular issued on Friday to all the branches, at the expiration of the 14-day ultimatum, they would be left with no other option than to withdraw their services and shut down the universities if the Federal Government failed to address their grievances.

The circular titled, “Notice of Industrial Action”, was signed by the Chairman of JAC and President of SSANU, Samson Ugwoke and the General Secretary of NASU, Peters Adeyemi.

The circular reads, “This is to inform you that the Joint Action Committee of NASU and SSANU met today, Thursday August 1, 2019, to consider the issues which led to the nationwide protest in our various branches, viz, payment of earned allowances, University Staff Schools matter, renegotiation of 2009 FGN/Unions Agreement, among others.

“After extensive deliberations, JAC further observed that no date has been rescheduled by the President of the Senate, His Excellency, Senator Ahmed Lawan for the meeting with the leadership of JAC national.

“The meeting earlier scheduled by the Federal Ministry of Education with the leadership of JAC national has been rescheduled for Wednesday, August 7, 2019 with no reason(s) stated.

“From the foregoing JAC national has resolved as follows:

“That a 14-day ultimatum of industrial action be given to the Federal Government of Nigeria to address the pending issues with effect from Monday, August 5, 2019. During the period of the ultimatum, all branches are hereby directed to carry out peaceful protest on Tuesday, August 6 2019 and Thursday, August 15 2019 respectively.

“At the expiration of the 14-day ultimatum, Sunday, August 18 2019, without any positive response from the Federal Government of Nigeria, members shall proceed on a 5-day warning strike in all branches from Monday 19 to Friday, 23 August 2019.

“You are therefore directed to properly mobilize our members for this action. All defaulting branches shall be sanctioned accordingly.”