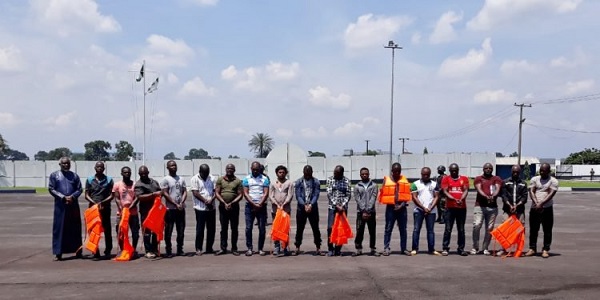 The Nigerian Navy has arrested 18 male sailors, including one Indian, for allegedly attempting to illegally export stolen crude oil to Ghana.

Executive Officer, Nigerian Navy Ship (NNS) Pathfinder Port Harcourt, Capt. Adegoke Ebo made this disclosure on Wednesday while handing over the suspects and vessels to the police at the naval base in Port Harcourt.

According to him, the sailors had planned to move stolen crude oil from Nigeria with two foreign vessels, MT Apecus and MT Invictus, believed to be owned by Petrogress Incorporation with offices in Nigeria, Greece and U.S.

The suspects were on the verge of moving the crude oil to Ghana before they were arrested by naval forces.

“Among those arrested was the Managing Director of Petrogress Incorporation in Nigeria, Osimili Adah.

“Adah stationed two vessels, MT Apecus and MT Invictus at Qua Iboe (Akwa Ibom) and in Bonny (Rivers) with intent to lift the petroleum product before the seizure.

“Our findings revealed that Adah has been actively involved in sourcing crude oil from Nigerian creeks and shipping it to Platon Gas Oil Refinery in Tema, Ghana without clearance and approval.

“Additionally, evidence available to us suggests that the illicit crime had been going on for a while” Ebo alleged.

Capt. Ebo stated that the suspect later disclosed names of his accomplices and facilitators and also presented evidence and proof to the illicit trading.

The suspect during interrogation, revealed that the report of pirate attack on MT Apecus on April 19 was stage managed.

Recall that five Indians and two Nigerians were reportedly abducted onboard MT Apecus by suspected sea pirates off the coast of Bonny in Rivers on April 19.

“Contrary to the initial reports, our investigation revealed that the abduction was rather as a result of failed oil theft collaboration.

“Investigation revealed that one of the aggrieved syndicate resorted to the abduction of the five Indians and two Nigerians.

“Also, information made available from a sister maritime agency revealed that MT Apecus had been conducting trading activities in Nigerian waters since 2014 without clearance and approval.

“It was found that the vessel has changed name and flag under which she operates no fewer than on 15 instances,” he said.

Adah confessed to newsmen of his alleged involvement to the accusations.

Adah said that he was an agent to the two vessels, but that MT Apecus entered into Nigeria without his knowledge and consent. According to him, the handing over is to enable the police to conduct further investigations on the incident and the suspects.