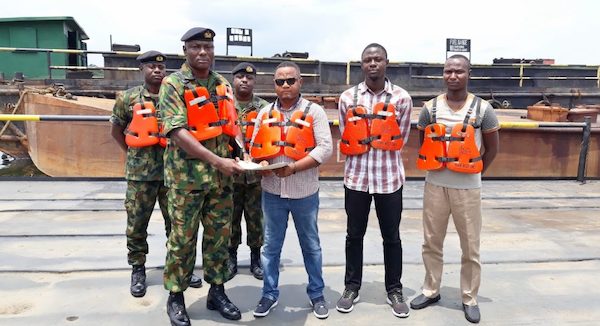 The Nigerian Navy has confirmed the seizure of no fewer than three barges allegedly involved in illicit oil deal on Onne waterways, Rivers State, which may be forfeited to the Federal Government on conclusion of investigation.

This was revealed on Thursday by Capt. Adegoke Ebo, Executive Officer, Nigerian Navy Ship (NNS) Pathfinder, in Port Harcourt, while handing over the barges to the Economic and Financial Crimes Commission (EFCC).

Capt. Ebo further noted during the handover to the EFCC that the barges were allegedly moving unspecified quantity of petroleum product believed to be adulterated diesel before they were seized.

“Two of the barges, MT Tomking and an unnamed barge were intercepted and seized by NNS Pathfinder patrol team on Feb. 21 on Onne waterways.

“Similarly, our patrol team acting on intelligence also intercepted another barge, MT Deborah along Nkpor waterways in Rivers on March 27.

“The three barges were laden with the unspecified volume of petroleum products suspected to be illegally refined Automotive Gas Oil (diesel) at the time they were arrested,” he said.