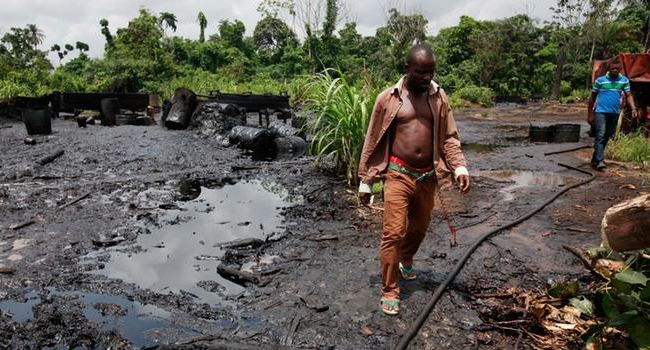 Men of Nigerian Navy have destroyed no fewer than 50 illegal refineries around Yeye, Burutu and Ibafa creeks in Delta State.

During a briefing in Warri on Tuesday, it was made known that the refineries were destroyed in the last 32 days in efforts to forestall bunkering and vandalism in the region.

The Commander of NNS Delta, Commodore Ibrahim Dewu, spoke during an educational tour for journalists to some naval operational bases in the Niger Delta.

It was gathered that destruction of the illegal refineries was done with the use of swam buggies, an excavator used in swampy areas to crush metallic substances and render them unusable, thereby avoiding further pollution of the land and surrounding water.

It was also learnt that the navy identified over 900 illegal refinery camps within NNS DELTA’s area of operation (AOO) with the bulk of it located around Ughelli and Warri South local government areas.

According to Commodore Dewu, several persons have been arrested for various maritime offences and handed over to prosecutorial agencies, while the vessels were kept in trust for the agencies, in line with the Harmonised Standard Operation Procedure (HSOP).

Decrying the delay in prosecuting the cases, the commander noted that it was costing the Navy so much money to maintain the vessels to avoid their going aground.

He said some of the vessels had been in the jetty for up to seven years, while the recovered 185 outboard engines, hoses and other equipment recovered from the suspects or sites were littering the base.

Read also: Rev Ayokunle wins another 3-yr tenure after re-election as CAN President

The Navy commodore said the cases of more than six ships apprehended by his command for alleged oil theft in the last six months were yet to be resolved in courts.

According to him, the criminals were emboldened due to the slow pace of justice.

Dewu said the base had adopted constant and effective surveillance of the hinterland from land and air to adequately comb the terrains.

The Director of Naval Information, Commodore Suleiman Dahun, who led the tour delegation, said the exercise was to expose journalists to some of the daily routines of the Navy and the terrain its personnel work in.