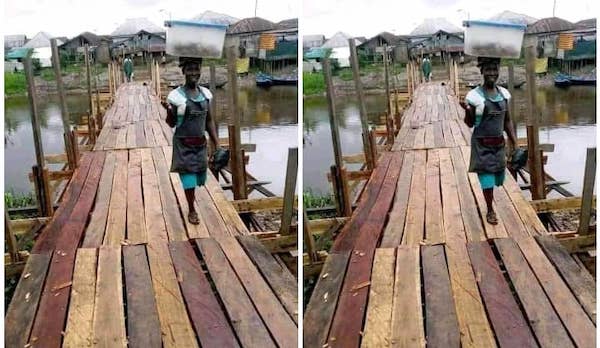 The Niger Delta Development Commission (NDDC) has denied that it constructed a wooden bridge worth N2.3 billion for the Elebele community in Ogbia local government area in Bayelsa State as alleged by a viral picture.

The Commission urged Nigerians to regard claims that the project was awarded in 2018 and completed in 2020 as “fake news”.

According to a statement signed by the Commission’s Director of Corporate Affaris, Charles Obi Odili on Friday, the Elebele community had sought the assistance of the Commission to rebuild the bridge which had collapsed, adding that the proposal was still undergoing checks and was at the design stage.

Meanwhile, the people, he said, had resorted to self-help and had constructed the wooden bridge without the commission’s input.

“We have gone through our records for the past 18 years and there is even no contract offer for the construction of a bridge in the community.” Mr Charles added.

He further accused “detractors” of the Commission on social media and those at the recent public hearing by the National Assembly of bearing false allegations.

“We urge our stakeholders to regard the post as part of the propaganda tactics of those who want the Niger Delta Development Commission, NDDC, to be scrapped to deny the people of the region, the benefit of infrastructural and economic development.

The statement is coming only days after the Acting MD of the Interim Management Committee, NDDC, Prof. Kemebradikumo Pondei collapsed before a Reps panel while responding a 1.5 billion financial misappropriation allegation in Abuja.