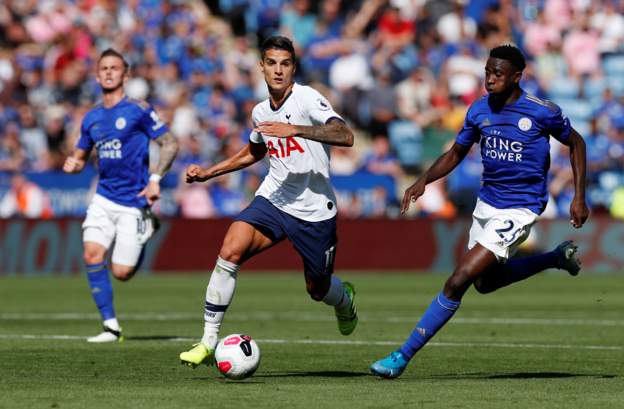 Super Eagles midfielder, Wilfred Ndidi was in action for Leicester in their Premier League win against Tottenham Hotspur at the King Power Stadium on Saturday.

His compatriot, Kelechi Iheanacho was neither on the bench nor played from the start.

The Foxes put up an excellent second half performance as they came from behind to beat their visitors 2-1.

With the game still goalless in the early exchanges of the encounter, Leicester thought they had opened the scoring when Ndidi scored, but the goal did not stand.

The Nigerian star scored on the rebound after Paulo Gazzaniga spilled Youri Tielemans’ effort, but the goal was ruled out for offside by VAR.

England striker, Harry Kane opened the scoring in the 29th minute – his fourth league goal of the season – slotting
Heung-Min Son’s clever flick beyond Kasper Schmeichel despite being knocked off balance by Caglar Soyuncu.

Spurs could have doubled their lead early in the second half when Serge Aurier scored with a low drive, but it was disallowed for a marginal offside call against Son.

But Ricardo Pereira put the Foxes back on level terms in the 69th minute, before James Maddison’s 85th minute goal helped Leicester come from behind to beat Tottenham.