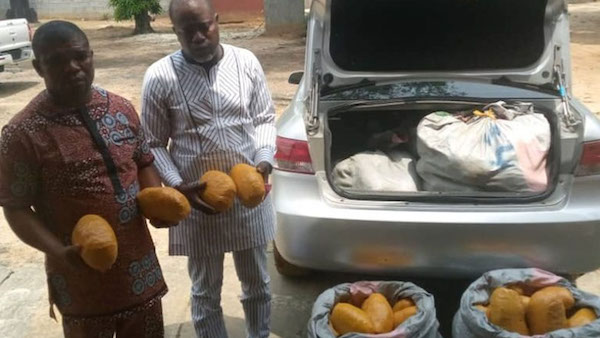 The Rivers State Command of the National Drug Law Enforcement Agency (NDLEA) on Tuesday, apprehended two people who allegedly tried to smuggle about 115 kilogrammes of illicit drugs into the state.

This was disclosed in a statement by the agency, signed by it’s spokesman in Rivers, Emmanuel Ogbumgbada, noting that the operatives of the command arrested the suspects as they tried to smuggle about 200 blocks of compressed Cannabis Sativa stored inside five bags into Rivers.

According to him, the NDLEA Ahoada Area Command intercepted the contraband inside an ash-coloured Hyundai Sonata saloon car near the JTF checkpoint in Ahoada East Local Government Area of Rivers.

““Preliminary investigation revealed that the suspects were moving the illicit substance from Edo state to Omoku area of Rivers State to supply to their customers,” he said.

Meanwhile, Ogbumgbada said the suspects were currently being interrogated by NDLEA’s operatives and had already provided useful information.

Related Topics:cannabis in RiversNDLEA
Up Next