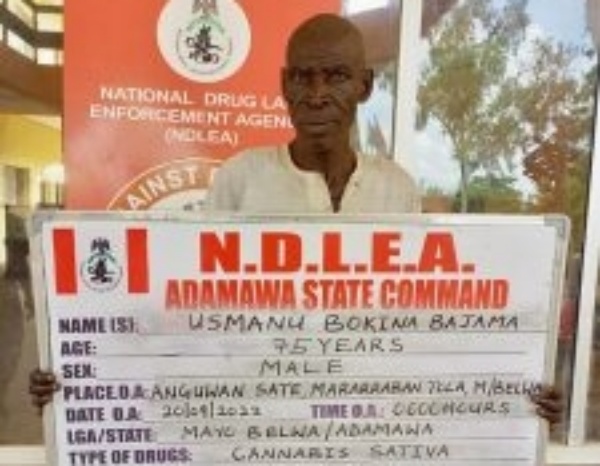 The National Drug Law Enforcement Agency (NDLEA) has arrested a 75-year-old grandfather, Usman Bahama aka Clement, and 21 others for alleged possession of illicit drugs across the country.

The NDLEA’s Head of Media and Advocacy, Femi Babafemi, who disclosed this in a statement on Sunday in Abuja, said the suspects were arrested in raids carried out in seven states.

He added that the septuagenarian was arrested on September 20 at Anguwan Sate, Mayo Belwa local government area of Adamawa State.

He said: “It was discovered that he had an Indian hemp plantation from where 49kg of the illicit substance was recovered.”

Read also:Buhari hails NDLEA for seizure of cocaine in Lagos

Babafemi also revealed that 1.01 million bottles and capsules of a newly-banned psychoactive substance “Akuskura’’ and tramadol were intercepted by the operatives.

He added that 2,536kg of Indian hemp were seized, while more than 10 hectares of Akuskura farms were destroyed in Edo and Adamawa.

NDLEA operatives also intercepted at least 19,878 bottles of Akuskura along the Ilorin-Jebba Highway in Kwara on September 21.

Two suspects, Oladokun Oluwaseun (49), and Ibrahim Jimoh (27) were arrested in connection with the drug.

“They claimed the consignment, packed in 35 jumbo sacks, was loaded in Ibadan and meant for distribution in Jos.

“Earlier, two suspects, Ukoro Ifeanyi (46), and Idowu Toyosi (20), were arrested with 2,290 capsules of tramadol and 100 bottles of codeine-based syrup at Mararaba Park, Ilorin.

“The drugs were brought in from Onitsha, Anambra,” the NDLEA spokesman added.