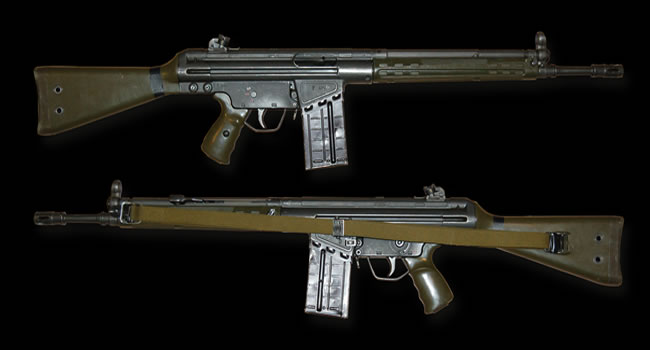 The Benue State Command of the National Drug Law Enforcement Agency (NDLEA) has arrested a man with a fabricated high calibre G3 rifle and 78 rounds of live ammunition.

Speaking at a press conference in Abuja on Thursday, Chairman, NDLEA, Brig. Gen. Buba Marwa (rtd) said the suspect would be handed over to the appropriate authority for further investigation.
According to Marwa, the suspect was arrested on August 4, in a bus en route Jos from Onitsha, after the vehicle was flagged down at Aliade checkpoint for search.

Marwa said the checkpoint was to stop and search vehicles for drugs, however, he noted that the NDLEA makes arrests when other criminal items such as heavy weapons are found.

“In the process, an iron box completely welded end to end was found in the vehicle, and when the passengers were questioned to know the owner, the suspect, Celestine Christian, accepted ownership.

“When the steel box was taken to the Benue State Command along with the suspect, an electric filing machine was used to cut it open.

“A fabricated high calibre G3 rifle was discovered with 78 rounds of live ammunition and five empty shells of the same calibre were discovered,” he said.

Also, Marwa disclosed that people now manufacture weapons on their own, which they sell to bandits, kidnappers, and criminal gangs among others.

During interrogation, the suspect, identified as Christian, claimed that he had talent in making local guns, adding that he was hoping to get a job in the military with it.

Also, Christian said he was aware it was a crime to manufacture weapons without a permit in Nigeria, however, he said he was looking forward to getting a license.

He said that he had met a soldier who told him to make a sample and told him he could get a government job with his talent.

“I do not have a permit but I was looking forward to getting one with my talent. They will not believe I can do this that is why I need to convince them with a sample,” he added.

In the same vein, Marwa said that three bandits armed with AK 47 rifles were also intercepted by officers on patrol in Malumfashi Local Government Area of Katsina State.

He noted that a car, three AK 47 rifles with magazines and ammunition, different types of charms, rings, cash, and other items, were recovered from them.

“I also asked that Christian be transferred to Abuja because of the calibre of weapon found with him, which he claims he manufactures.

“For us at NDLEA, we will continue to do our best with our highly dedicated officers and men to cut off accessibility to illicit drugs by criminal gangs by blocking the trafficking of these psychoactive and psychotropic substances.

“In doing this, we will not shy away from complementing the efforts of other security agencies, especially our armed forces in our collective bid to restore security and maintain law and order in all parts of the country,” Marwa added.