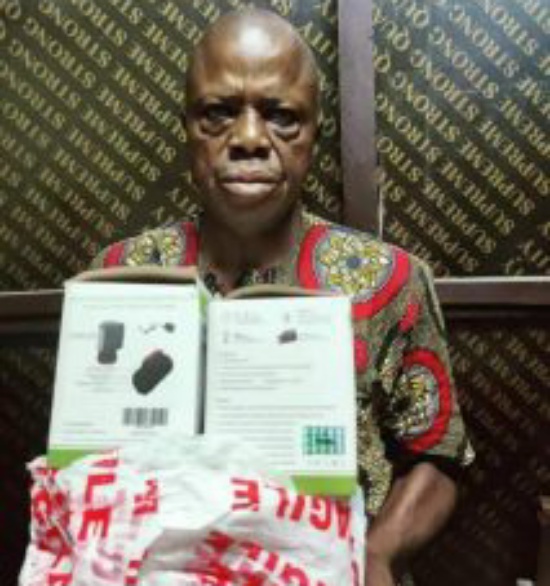 The National Drug Law Enforcement Agency (NDLEA) has arrested a 63-year-old suspected peddler, Vincent Obimma, at a park inside the Apapa seaport in Lagos State.

The NDLEA spokesman, Femi Babafemi, who disclosed this in a statement on Sunday in Abuja, said the suspect was arrested with 350grams of cocaine and 150grams of heroin

He said the drugs were hidden in industrial torch packets heading to Kano State, adding that the suspect was arrested on March 11.

The spokesman also confirmed the arrest of a suspected drug dealer, James Okenwa, in a follow up operation at Central Market in Kaduna State.

According to Babafemi, the suspect admitted the ownership of 1,807 bottles of cough syrup with codeine that were earlier recovered from two suspects at a tollgate in the state.

The statement read: “At the point of his arrest, another 152 bottles of the drug were recovered from his vehicle.

“He has accepted ownership of all the 1,959 bottles of the codeine syrup.

“ Two fake security agents – Akalonu Justin and Azimbi Festus – who were coming from Onitsha and heading to Maiduguri, Borno State, were arrested in Yobe State.

“85kg of cannabis was also recovered from the warehouse of a notorious drug dealer in Pawari area of Damaturu, the state capital on March 10.

“In Anambra State, a total of 38,605 tablets of assorted opioids were recovered from a 29-year-old drug dealer, Awoke Friday at Nkwelle junction, Onitsha.

“He was arrested on Friday, March 11 with the support of men of the Nigeria Police Force.”