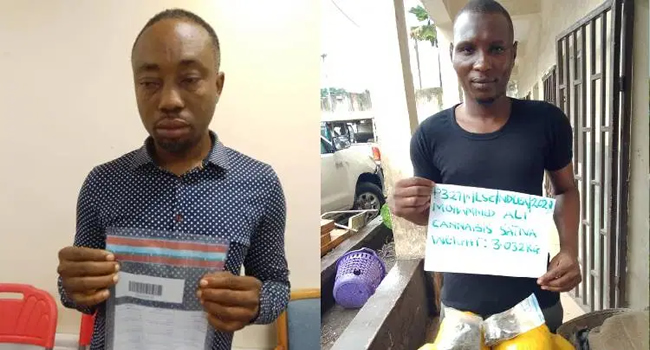 Mr Femi Babafemi, Director, Media and Advocacy, NDLEA, made this known in a statement on Sunday in Abuja.

He added that Rasheed was arrested when he brought a consignment from his client to a freight forwarder for export to Malabo in Equatorial Guinea.

According to him, when the package was searched, 150 grammes of cocaine, concealed inside two pieces of air freshener were discovered.

“A follow-up operation on the following day, led to the arrest of one Egbo Emmanuel Maduka, at his residence on Wednesday, June 9.

“The seizures were made on June 4 and June 8.

“Also on Friday, June 11, a male passenger, Udogwu James Johnson, on Qatar Airlines from GRU in Brazil was arrested at D-arrival hall, MMIA, Lagos with nine wraps of cocaine that weighed 300grammes in his pants,’’ he said.

The director quoted the Chairman, NDLEA, retired Brig. Gen. Buba Marwa, as commending the MMIA and Lagos State Commands of the agency for the feats.

He charged officers and men of the two commands not to rest on their oars, urging them to remain vigilant and intensify the ongoing offensive against drug cartels in their areas of responsibility.

Related Topics:CocaineNDLEAtraffickersuber driver
Up Next