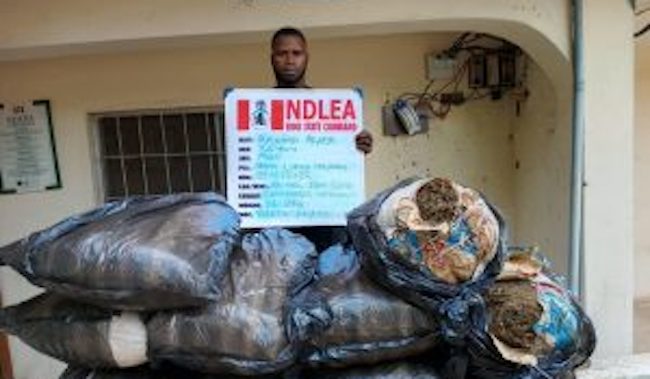 The NDLEA Director of Media and Advocacy, Femi Babafemi, who disclosed this in a statement on Sunday in Abuja, said the illicit substances were seized in Kaduna, Kano, Kogi, Rivers, and Zamfara States.

He said 10,884 bottles of codeine and 825.016 kilograms of Cannabis sativa were also recovered during raids last week.

Babafemi said: “Zamfara, a Mercedes Benz truck with reg. no. XB 986 AGB going from Onitsha to Sokoto was intercepted in the Tsafe area of the state on Friday, May 20.

“The driver of the truck, his assistant and three other persons – Alex Chukwuemeka (37), Ignatius Mokwe Odikpo (47), and Andrew Chijokwe (47), the owners of the drugs have also been arrested.

“The arrests followed a follow- up operation at a hotel in Gusau where the persons were waiting to receive the consignment for possible movement to Sokoto.

“In Kogi State, a fake security agent, Richard Agada, was arrested on Wednesday, May 18, while conveying 10 bags of cannabis sativa, weighing 116.8kg in a white Nissan van.

“Various quantities of opioids and cannabis were equally seized in two separate operations the previous Tuesday and Monday, in other parts of the state, and a drug dealer, Ayuba Nda Isah, 32, was arrested.

“Three suspects: Nornu Abanne; Yirakpoa Emmanuel and Dornu Gbarazia were also arrested at Kaani community and Bori with 90kg of cannabis and 1.5 gram of cocaine on Wednesday, May 18.”

NDLEA destroys 21 tonnes of Indian hemp, others in Niger