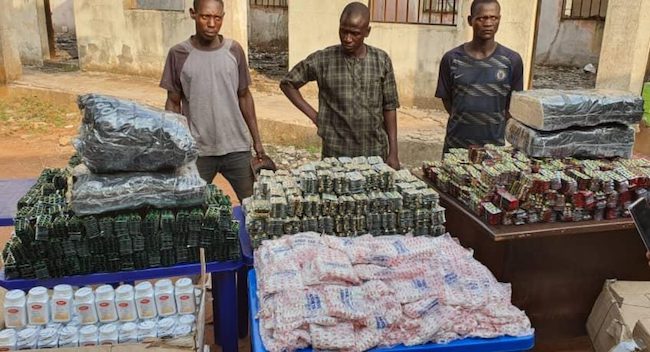 The NDLEA Director of Media and Advocacy, Femi Babafemi, who disclosed this in a statement on Sunday, said the drugs were recovered from a truck carrying “legitimate goods” to Kebbi State.

He added that the agency operatives in Lagos also stopped suspected traffickers from ferrying parcels of cannabis sativa to the United Kingdom.

The statement read: “Acting on credible intelligence, operatives in Edo State on Friday 14th January, 2022, intercepted a trailer coming from Onitsha and going to Yauri in Kebbi State.

“A thorough search of the truck led to the discovery of psychotropic substances concealed under legitimate goods.

“The driver of the truck, Bashir Lawali, 30, was arrested along with Abubakar Sani, 30, and Ali Abubakar, 19, while the exhibits in Kano were seized from one Sa’idu Yahya, 31.

“Attempts by drug traffickers to export 73 parcels of cannabis (34.05kg) concealed in foodstuff plastic containers to the United Kingdom through the NAHCO export shed of the Murtala Muhammed International Airport, Ikeja, Lagos, were frustrated by operatives on 8th January.

“In reverse bid, moves by illicit drug merchants to bring into Nigeria 94 parcels of cannabis indica (Colorado) weighing 43.4kg through the Tincan seaport in Lagos were crushed on 13th Jan. when operatives intercepted the drug inside a 40ft container from Canada.”