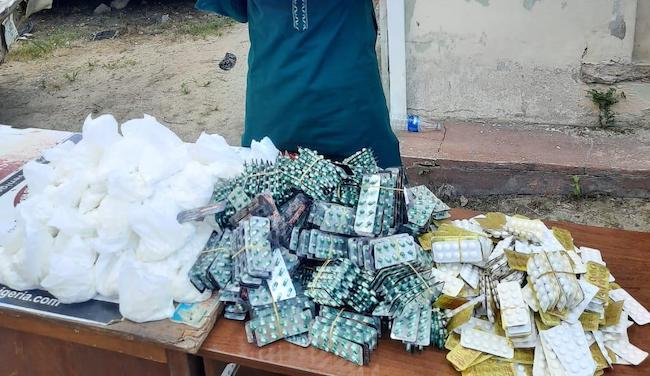 Operatives of the National Drug Law Enforcement Agency (NDLEA) have seized 34,950 capsules of Tramadol and Diazepam in Lagos.

The agency’s Director of Media and Advocacy, Mr Femi Babafemi, who disclosed this in a statement on Saturday in Abuja, said the drugs are meant for delivery to Boko Haram insurgents in Borno.

He said a 25-year-old suspect, Mohammed Isah, who was recruited to move the drugs from Lagos to Borno was arrested at a motor park in Agege area of Lagos on Tuesday.

Babafemi said: “Under interrogation, the suspect said he came to Lagos in 2013.

“He (Isah) said when he got to Lagos, he started riding a commercial motorcycle (Okada), then a tricycle (Keke Marwa), and currently drives a township bus plying Ikeja to Ojota.

“He said on May 28, one Kakali Abubakar invited him to Ezekiel Street, Ikeja, and gave him the assignment of transporting the drugs to Maiduguri with an offer to pay N50, 000, which he accepted.

“He said Kakali advised him to either board a tanker or trailer from Lagos to Maiduguri, to avoid being caught.

“The suspect confessed that he later travelled in a bus operated by SD Motors from Lagos to Kano and then took another vehicle to Maiduguri.

“The suspect claimed that he accepted the offer because of financial strain on his family (wife and three children). He said the family was displaced by Boko Haram activities currently lives in an Internally Displaced Persons (IDPs) camp in Maiduguri.’’