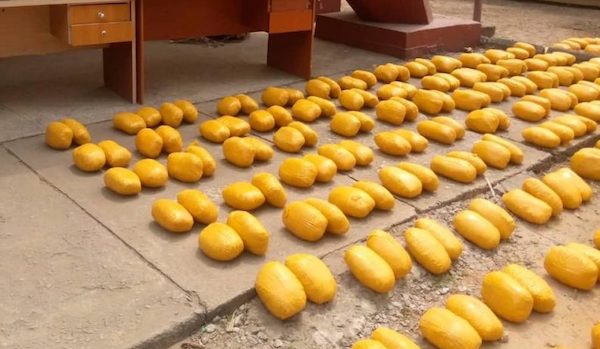 The National Drug Law Enforcement Agency (NDLEA) has uncovered a warehouse of compressed Cannabis Sativa at the Abuja Estate in Port Harcourt, Rivers.

The state’s Commander of NDLEA, Rachael Shelleng, who announced this in a statement on Sunday, said officers of the agency stormed the cannabis warehouse in the early hours of Saturday.

Shelleng said 23 bags of compressed blocks of cannabis Sativa weighing 621 kilogrammes and 0.029 kilogrammes of cocaine were recovered during the operation.

The NDLEA commander said: “After evacuating the exhibits, the officers proceeded to the slaughter area of Trans Amadi in Port Harcourt metropolis where they also recovered 0.006 kilogrammes of heroin and 0.048 kilogrammes of methamphetamine.

“The seized Cannabis Sativa has been estimated to have a street value of over N17 million.

“Three male suspects were apprehended in connection to the seizures and taken into custody for further investigation.”

Shelleng said both the Abuja Estate and Slaughter areas of Port Harcourt have been identified as very notorious spots for illicit drug peddling.

She added that NDLEA would stop at nothing to ensure that the black spots and the entire state were rid of illicit drugs.

Related Topics:cannabis warehouse in RiversNDLEA
Up Next