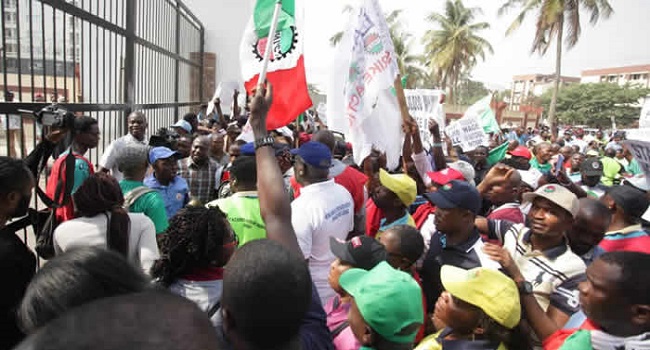 Nigeria Labour Congress on Wednesday enforced its strike action in order to press home their demands from the Federal Government.

Ripples Nigeria gathered that members of Delta state chapter of the congress were allegedly noticed going about to shut offices and schools in Asaba ahead of the planned strike, over delay in implementation of the new minimum wage.

It was learnt that NLC members were also seen patrolling Asaba in a marked Hiace mini-bus, closing government offices and turning back school children.

Recall that the organized labour had threatened to commence industrial action on Thursday if the Federal Government fails to meet its demand on the consequential adjustment.

He said the strike action had already commenced, therefore, members were expected to comply with directives from their national body.

“We are on strike and that is all I can tell you for now. We expect offices and schools to comply.

“The strike is in force that is why we are going round to enforce compliance,” he told newsmen

It was also gathered that the state government secretariat, along Okpanam road was equally shut as some workers who had reported for work were seen milling around the gate.

“They came this morning and ask us to go home. I reported to work at about 8:15am, but now am going home.

“I don’t know much about the strike, so I am just waiting to see how things will turn out,” Okolo said.

Ripples Nigeria had earlier reported that issues around the implementation of the minimum wage might soon be resolved as both the organized labour and the federal government had shifted grounds on the issue of consequential adjustments.

While negotiations had not been finalized, it was suspected that labour would shelve the planned industrial action.