Neymar, four others sent off as Marseille inflict another defeat on PSG | Ripples Nigeria

Home » Latest » Neymar, four others sent off as Marseille inflict another defeat on PSG 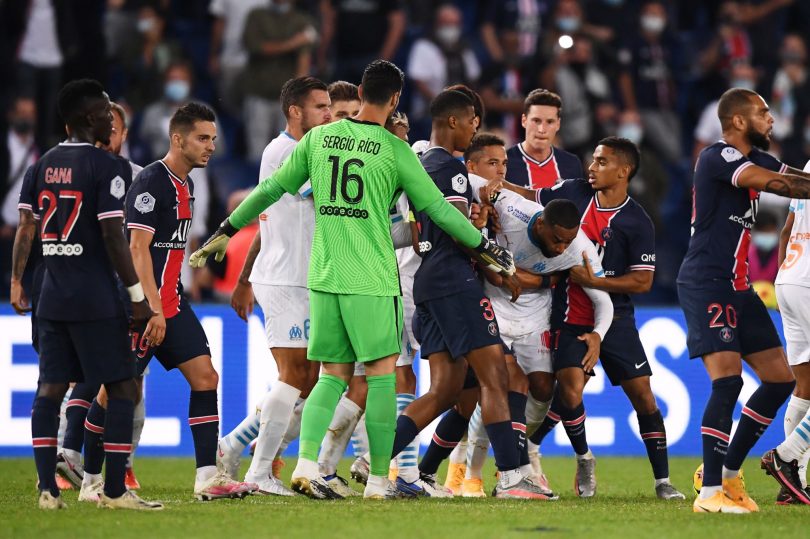 Neymar and four other players were shown red cards just before the final whistle as Paris Saint-Germain fell to a 1-0 defeat to Marseille.

It is now two defeats in two games for the French Ligue 1 champions, who reached the final of the UEFA Champions League last month.

Having lost to promoted Lens in their opening game of the season, the Thomas Tuchel side appear to be struggling as they lost the Le Classique on matchday two.

Neymar, who was absent in Lens game due to his contraction of coronavirus, made a return to the team and was involved in a late brawl that saw five sent off.

PSG substitutes Leandro Paredes and Layvin Kurzawa – and Marseille duo Jordan Amavi and Dario Benedetto – were shown red cards in the 97th minute of the encounter.

The referee then watched a VAR replay which showed Neymar had punched the back of the head of Alvaro, and showed him a straight red card in the 99th minute.

The Brazilian told the fourth official as he left the pitch, that he had heard a racist comment.

The game saw 17 cards shown in total, a record for a Ligue 1 game in the 21st century.

It was Florian Thauvin who scored the only goal to inflinct on PSG a second loss in their opening two games, a first since 1984-85.