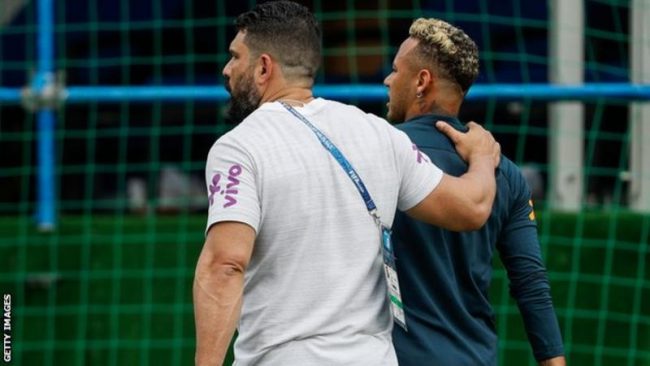 Brazil forward Neymar has been reported injured during the team’s training session on Tuesday – three days before their 2018 World Cup group game against Costa Rica.

Neymar was one of the three forwards alongside Gabriel Jesus and Willian in their first game against Switzerland which ended 1-1 at the Rostov-on-Don Stadium in Russia on Sunday.

Brazil are hoping to reboost their chances of qualifying from the group when they play in their second group game, but their mission may have suffered a blow with neymar injured in training.

The 26-year-old, who got injured at Paris St-Germain in March and only returned shortly before the Russia showpiece, withdrew from their training session for treatment on his right ankle.

A Brazil spokesman linked the injury to Neymar being repeatedly fouled their opener against Switzerland, as the winger, who played 90 minutes, did not take part in training on Monday at the team’s base in Sochi.

Neymar was fouled 10 times during the game. He tops the chart of most fouled so far in the tournament.

“As soon as he felt the pain he went to the physio,” Vinicius Rodrigues was quoted as saying by the BBC.

“He will stay there for today and tomorrow morning, and will train as normal tomorrow.”

Recall that Neymar’s 2014 World Cup campaign was ended by a fractured back in the quarter-final win over Colombia. His absence could have led to their 7-1 thrashing by Germany in the semifinal.

Brazil will face Costa Rica at the Saint Petersburg Stadium on Friday.

Despite Croatia loss, Eagles to get full group stage benefits if they advance