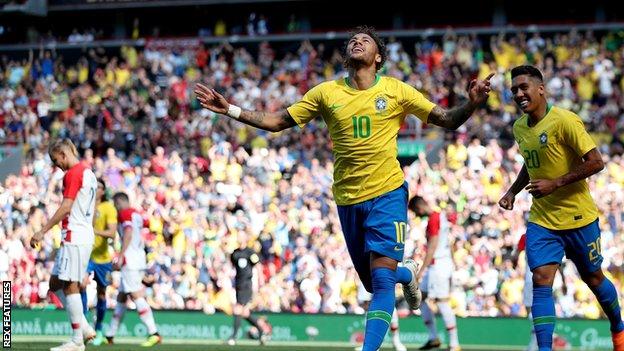 Paris Saint-Germain superstar, Neymar scored for Brazil in a friendly against Croatia on Sunday – his first game since returning from an injury that sidelined him for over three months.

Five-time World champions Brazil, who became the first team to qualify for the FIFA 2018 World Cup, began their preparations with the win at Anfield.

After an uneventful first half, substitute Neymar fired Brazil ahead when he smashed a shot in off the bar after a slick move involving Willian and Philippe Coutinho in the 69th minute.

The World’s most expensive player, who moved to PSG from Barcelona for a €200m fee last summer, has now scored 54 goals in 83 appearances for his country.

Liverpool’s Roberto Firmino made it 2-0 for the South Americans when he scored in added time to seal the victory.

Croatia, who are in same World Cup group as the Super Eagles of Nigeria, created first-half chances for Dejan Lovren and Andrej Kramaric, but didn’t score.

They have been drawn to battle Costa Rica, Switzerland and Serbia in the group stages of the World Cup.