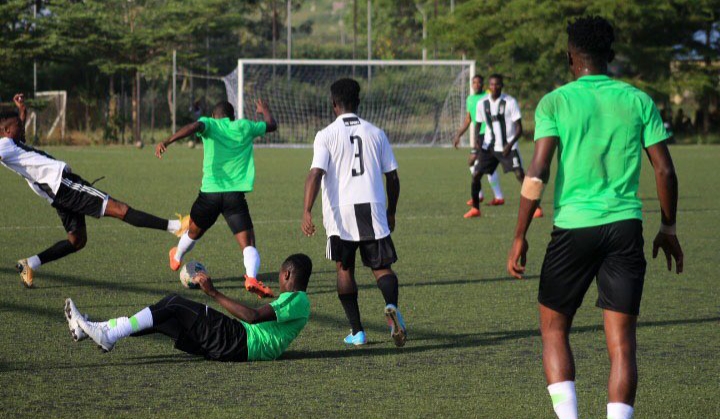 Nigeria’s Flying Eagles will have nothing to worry about as regards entitlement in the forthcoming WAFU U-20 Cup in Benin Republic as the Nigeria Football Federation (NFF) says it has it all sorted.

This was revealed to the players by the General Secretary of the Federation, Dr Mohammed Sanusi on Tuesday after the team won yet another friendly game ahead of the competition.

The Ladan Bosso boys defeated Zaria Academy 3-0 in a friendly game in Abuja, with Adewale Oladoye, Chukwubuikem Ikwuemesi and Chisom Orji all scoring in the game.

The team, who are expected to depart for the Benin Republic on Friday, will play their opening match on Sunday afternoon in Porto Novo against Cote d’Ivoire.

Speaking to the team during a visit at their camp in Abuja, Sanusi said the Flying Eagles’ accommodation and welfare for the WAFU B Tournament are being taken care of, as he went on to charge the players to do Nigeria proud.

“I must, first of all, congratulate you for being selected among all the players that came to try out for selection to represent Nigerian in the WAFU competition,” said Sanusi.

“You have to listen to your coaches and obey their instructions and most importantly, you must be disciplined at all times. You are not just representing yourselves and your families, but Nigerians who will look up to you to do the nation proud.”

The General Secretary added: “I was opportuned to be in Cotonou for a CAF Confederations Cup game and I used the opportunity to check on arrangements made for you. Everything is sorted now and it is left for you to do us proud when the competition begins.

“The NFF is also working towards making sure all your entitlements due to you are settled. You must be focused on the task at hand while you can be rest assured of our total support.”

Meanwhile, coach Bosso had named 20 players for the tournament, scheduled for Benin Republic from 5th – 20th December. The competition is also the qualifiers for the 2021 U-20 Africa Cup of Nations that will be staged in Mauritania in February 2021.