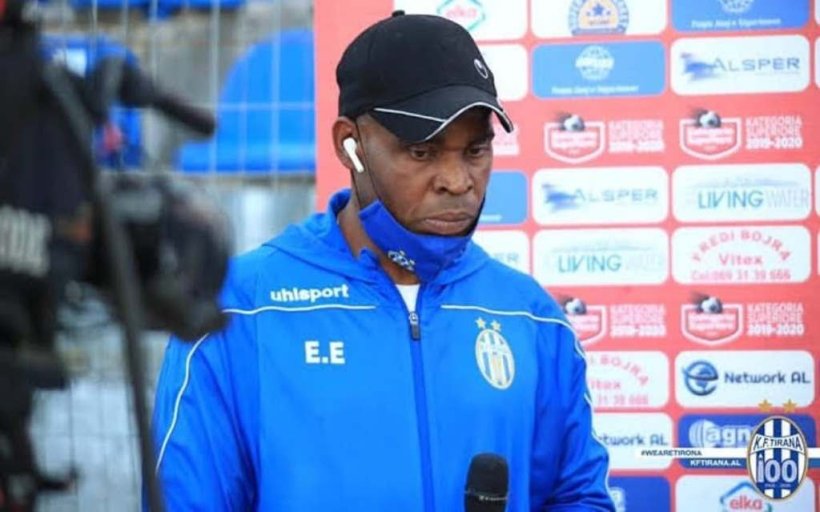 Following his historic feat in the Albanian league, former Nigeria international, Emmanuel Ndubuisi Egbo, has been getting congratulatory messages from across the world.

Egbo, who was a goalkeeper for the Nigeria national team during his playing days, became the first Nigerian and African to lead a European club to a top tier domestic title.

With three matches left in the Albanian top flight, Egbo coached KF Tirana to an unassailable lead and thus guaranteed the diadem. In the event, he has also led the team to the UEFA Champions League.

This week, President of the Nigeria Football Federation (NFF), Mr. Amaju Melvin Pinnick sent a message to Egbo: “I congratulate you and wish you only the best. This is also to say that we are very proud of your wonderful achievements.”

NFF General Secretary, Dr. Mohammed Sanusi praised Egbo for the feat and expressed the view that the coach has laid down a marker for fellow Nigerian coaches to go out and accomplish brilliantly.

“It was with a huge sense of pride that the NFF and the entire Nigerian Football family learnt of your exemplary achievement as the first-ever Nigerian, Black and African Coach to win a major European League, as you have steered KF Tirana to the Albanian top tier championship with few matches left in the on-going season.

“The fact that KF Tirana was unable to win any silverware since the year 2018 until your arrival in December 2019 puts your accomplishment in proper perspective.

“On our part, we wish you and KF Tirana an enriching and fulfilling experience in the UEFA Champions League, where you are bound to come across much tougher encounters, but you have already demonstrated that you have the capacity to be unflappable when the going gets tough.”

Meanwhile, Egbo has said he is looking forward to meeting European giants like Manchester United and Chelsea in the group stages of the Champions League.

“I’m someone that’s not afraid and it’s something that has helped me to achieve everything.

“So I will like to enter the group stage and meet this type of teams in order to show them that I know what I’m doing because if you believe in yourself God will give you every other thing,” he said.