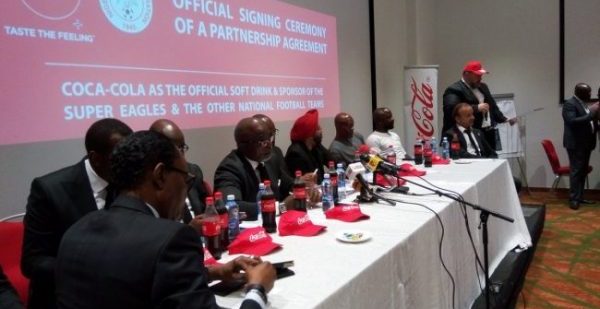 The Nigeria Football Federation (NFF) has signed a partnership agreement with Coca-Cola at a ceremony in Eko Hotels & Suites, Victoria Island, Lagos on Wednesday.

The beverage giant became the official soft drink and sponsor of the Super Eagles and other national teams in a deal worth $4 million that will run for five years.

Coca-Cola have now joined a growing list of sponsors that have gone into partnership with the Nigerian football house, including TGI Group, PayPorte and Aiteo Group.

At the ceremony, attended by various football administrators in the country, was also the Technical Adviser of the Super Eagles, Gernot Rohr. whose two-year contract extension was also officially signed.

Also at the press conference at the ceremony in Lagos, the NFF revealed the FIFA 2018 World Cup program for the Men’s national team.

The Eagles will play five friendly matches ahead of their participation at the global showpiece in Russia this summer.

They have two games lined up for March 23rd and March 27th, 2018 against Poland and Serbia respectively. While the game with Poland will hold in a yet-to-name venue in Poland, the game with Serbia will be hosted in London.

Then on May 28, Gernot Rohr’s men will play a farewell game against Congo at the Abuja National Stadium, where President Muhammadu Buhari is expected to be in attendance.

On June 2nd, the team will play a build-up fixture against the Three Lions of England at the Wembley Stadium, before finally facing Czech Republic on June 6.

Also, the official Super Eagles World Cup kit will be unveiled by Nike on February 7th in London.

Nigeria, who are making their 6th appearance at the World Cup, have been drawn in Group D alongside Iceland, Croatia and Argentina.

They will face Croatia in their first group game at the Kaliningrad Stadium on June 16, before playing Iceland at the Volgograd Arena on June 22 and finally Argentina on June 26 at the Krestovsky Stadium, St Petersburg.