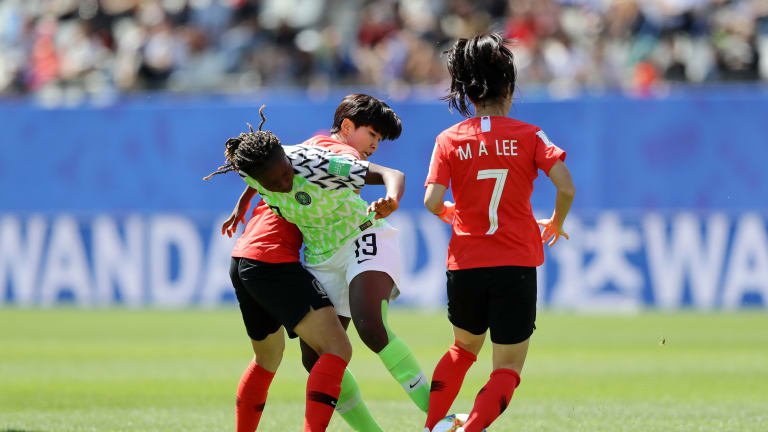 Having lost their opening game 3-0 against Norway last weekend, the Falcons needed to win their second game to keep hopes alive of advancing from Group A.

Nigeria got ahead in the 29th minute when an own goal by Kim Doyeon put the Thomas Dennerby ladies ahead, and unto halftime.

The goal was the first Super Falcons’ goal scored in the first half of a game at the global showpiece since the 1999 edition in a match against Denmark.

Despite the pressure mounted by the Asians in the second half, Falcons kept up their pace and got a second goal from a counter attack in the 75th minute through Oshoala.

The Barcelona Ladies forward ran unto a cross from Chidinma Okeke, contested the ball with a Korean defender, dribbled past the goalkeeper and slotted in to seal a 2-0 victory.

Oshoala was crowned the Player of the match for her excellent contribution.

It is the second time in the history of the FIFA Women’s World Cup that the Falcons won a game with a two-goal margin.

Goalkeeper Chiamaka Nnadozie, who benched the heroine in the final of the Africa Women’s Cup of Nations (AWCON) last year Tochukwu Oluehi, made her debut at the world stage.

The 18-year old put up a fantastic performance, successfully stopping the Koreans from scoring at several occasions, and became the youngest goalie to keep a clean sheet in the history of the competition.

With the victory, Nigeria have a chance to reach the round of 16, especially if they avoid defeat in their final group game against host nation France.

France, top of the group with more goals, will battle Norway in the group’s other game later on Wednesday.

The Falcons will take on France next Monday.