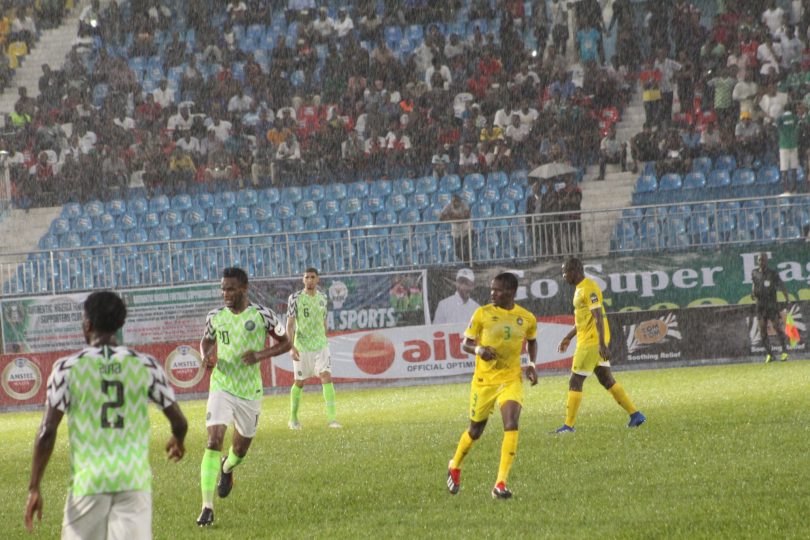 Nigeria’s Super Eagles were held to a goalless draw by the Warriors of Zimbabwe under a rainy atmosphere at the Stephen Keshi Stadium in Asaba on Saturday.

The game, a pre-Nations Cup friendly, began an hour behind schedule because of the weather, which went on to affect the overall quality of the match.

Both teams, set to represent their respective countries at the Africa Cup of Nations (AFCON) in Egypt, had several good chances at goal but none was converted.

Eagles Captain, John Mikel Obi made a return to the pitch for Nigeria, wearing the national captain’s band for the first time since he last played at the 2018 FIFA World Cup in Russia.

The skipper was awarded the Man of the Match after a brilliant display until he was substituted late in the game for John Ogu.

Samuel Chukwueze, who missed the U-20 FIFA World Cup as he opted for the senior national team, was also outstanding in the game, though his many attempts at scoring proved abortive.

Manager Gernot Rohr led his 25-man squad to execute the friendly, but the German gaffer will be dropping two members of the team as only 23 players will go to AFCON.

The Eagles will play one more international friendly against the Teranga Lions of Senegal before they finally kickstart their campaign in Egypt.

The match against Senegal is scheduled to take place at Alexandria in Egypt on June 16.

The Eagles will kickstart their AFCON campaign on June 22nd against Burundi, before facing Guinea and Madagascar in their other group matches.