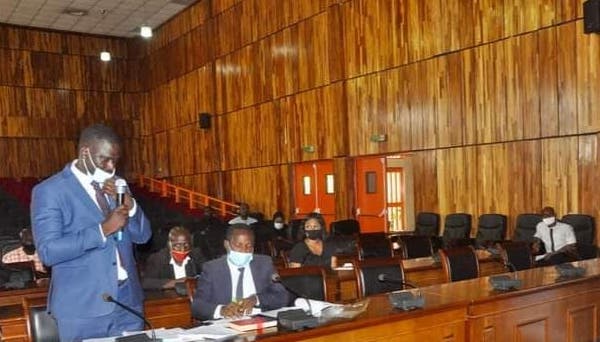 The National Human Rights Commission (NHRC) panel has ordered the police to produce operatives of the disbanded Intelligence Response Team (IRT) in Benue.

Ripples Nigeria had reported that the panel is investigating alleged human rights violations by the disbanded Special Anti-Robbery Squad (SARS) and other police units.

Rtd Justice Sulieman Galadima, Chairman of the panel, said the order became necessary in order for the officers to provide information on the whereabouts of one Morris Ashwe, a victim of alleged enforced disappearance.

Galadima gave the order, on Wednesday, February 25, after Ashwe’s brother, Raphael, alleged that he saw the victim was arrested by the IRT on May 8, 2018.

Galadima, sought to know the whereabouts of the IRT in Benue because Rapheal alleged that his brother was arrested by the team, led by DSP Haladu Mohammed.

”The police has to produce the officers of the IRT involved in the arrest of the petitioner’s brother. The force is a system and cannot appear helpless.

”The police should go through its records with the pictures available and the case file to get to the root of the matter,” Galadima said.

He adjourned the matter until March 23 for a continuation of the hearing.

Earlier, Rapheal, alleged that his brother (Ashwe), was arrested by the IRT in Benue over allegations of gunrunning and illegal possession of firearms.

“After my brother was arrested, we were told that he was taken to the IRT headquarters in Abuja,” he said.

The petition was against DSP Mohammed, Officer in Charge of IRT, Benue, Commissioner of Police, Benue, and the Inspector-General of Police.

Counsel to the respondents, Kenneth Ogbuchua, asked the petitioner if he got to know that DSP Mohammed was present when his brother was arrested.

”I have never met DSP Mohammed in person. But in the course of filing my petition, his name was dropped by Judith Nwese, Ashwe’s fiance who is now dead,” he said.

Also testifying, DSP Mohammed told the panel: ”I do not know anything about this case. I was not in Benue when the said incident took place.

”I was on posting in Kano at the time of the alleged arrest, detention, and inhumane treatment of the victim,” he said.