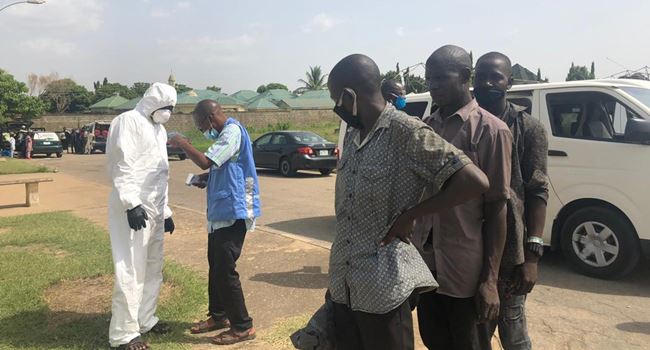 A passenger suspected to be COVID-19 positive travelling from Lagos to one of the northern states on Thursday died in Badeggi in the Katcha Local Government Area of Niger State inside the commercial vehicle he was travelling in.

According to reports, the bus with registration number JJJ 349XN, carrying passengers from Lagos had embarked on night journey despite the ban on interstate travel, but broke down in Babeggi on the Bida- Badeggi-Lambata high way.

Reports further had it that one George Udom, alerted the Niger State Task Force on COVID-19 to the presence of the bus at Badeggi in the early hours of Thursday.

The Bida zonal unit of the task force upon getting there discovered that one of the passengers suspected to be a COVID -19 patient had died.

The Chairman of the state COVID-19 task force, who is also the Secretary to Niger State Government, Ibrahim Matane, briefed Governor Abubakar Bello about the development.

The development was confirmed by the Director General of ICT and Public Enlightenment in the Governor’s Office, Abdul Bergki on his Twitter handle.

“To avoid infection, the chairman has been directed to call mechanics, who will fix the vehicle and escort the bus out of Niger State with security personnel back to where they are coming from and hand them over to the authorities there.

“All those to be involved must wear face mask, hand gloves, eyeglasses before touching the vehicle for repairs”, Berki said.