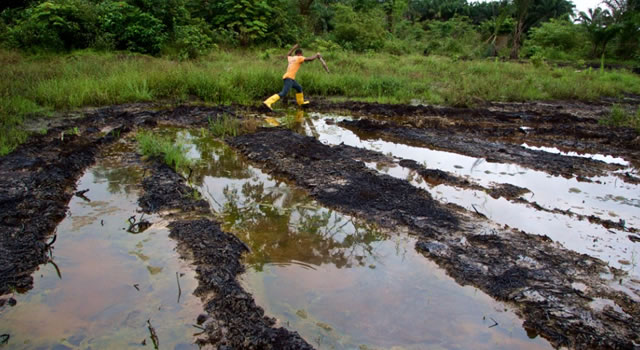 I recall listening with real curiosity to Professor Anthony Akpoborie, a Geologist and Lecturer, speak passionately to underline his position and express the depth of his conviction on the topic; Community Rights to Sustainable Environment and Clean Water Supply in the Niger Delta. That event was held in Lagos.

On that day, at that time and in that place, among other things, he stated communal rights to a clean environment and access to clean water supplies are being violated in the Niger Delta. By its admission, the oil industry has abandoned thousands of polluted sites in the region which need to be identified and studied in details. Aquifiers and other water supply sources which are being adversely affected by industrial or other activities needed to be recovered while communities are adequately compensated for their losses.

Without doubt, apart from the available data made available, the mind-eye of those present at the event were in consonance with his position.

However, close to two decades after those conversations was held in Lagos, overwhelming evidence of violations and wicked neglect of the region remain apparent in magnitude and extent.

Even the people of the region, who initially hoped that the current administration will sign into law, the Petroleum Industry Bill (PIB), to take care of the obsolete but existing Petroleum Act of 1969, have since realized that such may not be insight and now seek alternative solutions.

Factually supporting this assertion is open Letter dated May 20th , 2019 and addressed to the Executive Governor of Delta state, Senator (Dr.) Ifeanyi Okowa, by the Riverine communities in Delta state where the group bemoaned the non-presence of government projects in the coastal areas, lamented the Niger Delta Development Commissions’ (NDDC) and The Delta State Oil Producing Development Commission (DESOPADEC) choice of cities and towns for their projects, and advocated for the creation of Coastal Area development agency (CADA), as a way of ensuring a sustained development of the area.

For a better understanding of this piece, development is said to be sustainable ‘when it is achieved without excess environmental degradation, but in a way that both protects the rights and opportunities of coming generations and contributes to compatible approaches’.

Read also: My father and the Biafran war story

It is also an unquestionable position that for genuine development of the region to take place, it must require a collaborative effort of the government and the operators of the up, mid and downstream sector of the oil and gas industries operating in the region.
But very regrettable, scholars are in agreement that despite the series of achievement of this particular ideology (public-private collaboration) at the global stage, it manifests symptoms of failure in the Niger Delta.

Using the minimum components of the right to a healthy environment as a baseline, the environmental condition of the coastal communities in the Niger Delta region can best be described as not only deplorable but graced with non-development, poverty and extreme lack of government presence.

This brings to mind the question as to what exactly impedes the development of the Niger Delta region. Why is the legislative framework not providing a strong source of remedy for individuals and communities negatively affected by oil exploration and production in the coastal communities? If these frameworks exist, why is it not effective and enforceable? Is the framework as comprehensive as a legal solution to the issues of oil-related violations? Why has the nation not learned a valid lesson from the Dutch government where all operators are required to restore their areas of operation back to how nature intended?

Surely, providing answers to the above will unquestionably establish a link between the impoverishment of the region and the ‘ignorance hypothesis’ of the 1930s.

A postulation which among other provisions ‘maintains that poor countries are poor because they have a lot of markets failures and because policymakers do not know how to get rid of them and have heeded the wrong advice in the past. While rich countries on their part are rich because they have figured out better policies and have successfully eliminated these failures.

And without much labour, there are examples of adoption of disastrous policies and wrong advice in the handling of the challenges bedevilling the region by successive administrations.

Check!, if not disastrous policies and wrong advice, Federal Government ought to have respected the well-considered ruling by African Commission, dated October 2001, finding the Federal Republic of Nigeria in violations of 2, 4, 14, 16,18(1),21 and 24 of the African Charter on Human and Peoples’ (ACHPR), and recommended a total clean up of the polluted Ogoni and other adjourning communities in addition to taking preventive remedial and compensatory measures to improve economic and social outcomes for the Ogoni community.

Close to the above is that at a time stakeholders are calling for the immediate relocation to the Niger Delta `of the headquarters of both private and government-owned agencies such as the National Oil Spill Detections and Response Agency (NOSDRA), that has no business being in Abuja since the chunk of its responsibility is in the Niger Delta region, has also become the ripe period for the Nigerian National Petroleum Corporation(NNPC) to moot relocation of some of its subsidiaries back to Abuja using ‘concerns for office accommodation and security, the opportunity for more customers and their willingness to attend meetings, cost of office maintenance and the stability of power supply as excuse without considering the ripple reaction and effects of such move’’.

Concretely, if successive administrations had listened to right advice, and develop enforceable legal and operational frameworks for the industry, the IOC’s view of government calls for partnership as a dangerous fiction created to impose an unfair burden upon them would have been eliminated.

Next to these anomalies are another thorny wrong police on the part of the government; government’s refusal to have the nation restructured.

The Niger Delta house’s crude oil deposits but lacks the constitutional power to sign, monitor or regulate the explorations as the land use Act and other mineral laws in Nigeria exclusively vest such powers on the government at the centre.

Even the much celebrated Amnesty programme, with its large chunk of professionally-trained ex-militants without jobs has become but a medication which cures symptoms while leaving the root cause to flourish.

In all, there is no single answer to the multi-faceted plights of the people of Niger Delta, but any government desirous of developing the region must among other things ensure that the Petroleum Industry Bill is passed into law.