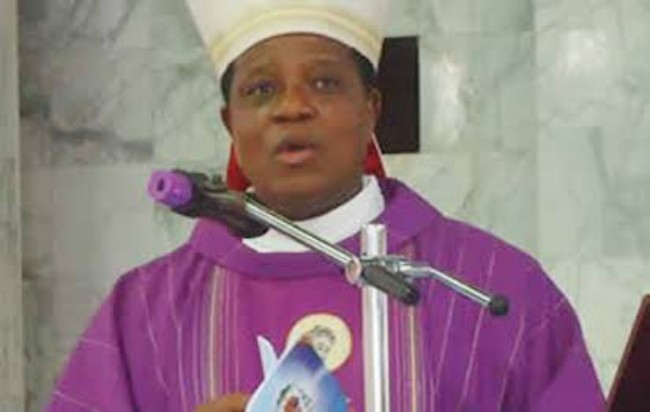 The Catholic Bishop of Nsukka Diocese in Enugu State, Bishop Godfrey Igwebuike Onah, has described Nigeria as a collapsed and crumbled country under the watch of the President Muhammadu Buhari-led government.

While reacting to the gruesome killing of a female student of the Shehu Shagari College of Education, Sokoto State, Deborah Samuel, by Muslim extremists last week, Bishop Onah accused the Buhari-led administration of deliberately crumbling the country.

Bishop Onah who also lamented how violence, corruption and other vices had become culture and tradition in Nigeria since Buhari got into power, said if the President had taken decisive actions early enough, the incidents would have been long since buried.

The clergyman also cited instances where his colleague, the Bishop of Sokoto Diocese, Matthew Hassan Kukah, was targeted by the Presidency for abuse and insult anytime he points out government’s faults, saying Buhari and his image makers are deaf to the truth.

In a statement he addressed to Nigerians on Tuesday, Bishop Onah said:

“My dear friends, I must be honest with you, today, I would have preferred to lock myself up in my chapel to pray and to weep for my nation where darkness has descended.

“To weep and pray for my church that is being folded out of existence in the world and Nigeria, to weep and pray for Deborah Samuel who was killed because she found herself in a part of the country where she thought was a home but not.

“To weep and pray for friend and brother, Bishop Mathew Kukah, the world acclaimed voice of the voiceless who has become a target by the same voiceless people who now see him as part of their problem rather than part of their solution.

“To weep and to pray for the poor miserable murderer of Deborah who have been left uneducated and unemployed deliberately so that they can be brainwashed, instrumentalized for the political end by religious bigots and political egoists.

“To weep and to pray for our political leaders under whose watch the country has crumbled and they look for who to blame on the mess which they have put all of us.

“But how can you preach love in a country where violence has become a rule? A country where corruption has become a norm and tradition, where impunity has become law, where the government feels so helpless that it is now appealing to religious leaders to talk to non-state actors not to make the security situation in our country worst.

“Those were the words of the Vice President when he spoke to all Bishops of Catholic Church in West Africa.

“Nigeria has crumbled and collapsed under the watch of this present government. It is the sad reality we have now found ourselves in.”

Related Topics:BuhariEnugu Bishop
Up Next