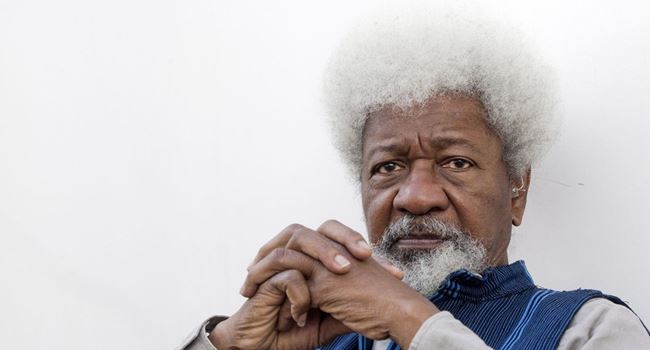 Nobel Laurette, Prof. Wole Soyinka, has declared that Nigeria is in a parlous situation as nobody is in charge.

He added that the year 2020 has been the most challenging year as a result of the many problems facing the nation.

Soyinka who made the comments on Wednesday at the Booksellers, venue of the presentation of his new book, ‘Chronicles of the happiest people on earth,’ a book with over 500 pages, stated that the situation in Nigeria was worse as a result of the imperial nature of its leadership.

Speaking further during the book presentation, Soyinka said that the situation in the country had reached a point where you are not very sure of where you are going and where you will end.

Soyinka also stated that the present situation in the country is not the way a nation should be and not the way the citizens should exist.

He said; “With the turbulence that characterises year 2020, and as activities wind down, the mood has been repugnant and very negative. I don’t want to sound pessimistic but this is one of the most pessimistic years I have known in this nation and it wasn’t just because of COVID-19, no. Natural disasters had happened elsewhere but how have you managed to take such in their strides?

“Was calamity as a result of human negligence or as a result of malignant activities when people find themselves under the control of other beings which I am afraid what most Nigerians find themselves in, it is like you don’t know from where the blow would descend. That is not the way a nation should be and that is not the way the citizens should exist.

“Situation has reached a point where you are not very sure of where you are going and where you will end it. As I had said before, you don’t believe, in many instances, that anybody is in charge. That, really, it’s a parlous condition for any nation… So, I am afraid it has not been a very good year for me generally,” Soyinka added.

Related Topics:COVID-19Nigeriawole soyinka
Up Next

NASS REPUBLIC: As Nigerian Senate piles pressure on a stubborn Buhari . Two other stories, and a quote to remember